Let there be…Axl? This weekend Axl Rose officially hit the stage as the fill-in lead singer of AC/DC. The band resumed their ROCK OR BUST tour in Lisbon, Portugal (I bet you think I had to look up where Lisbon was…you are correct) Saturday with a skeptical world ready to rip the band apart. I was surprised to see so many positive reviews for the show online. The general reaction online from fans has either been a resounding “meh” or a frothing “how dare they!” So when a bunch of major publications praised both the band and the new singer, I was stunned. I think that for the most part, people want Axl to succeed in “coming back.” The sad part, of course, is that Axl never really went anywhere. But with the recent announcement that Guns ‘N Roses would be getting back together it does seem like Rose has come back from the dead in terms of the popular culture.

Curious as to what this mash-up of rock titans would sound like, I was pleased to learn that the band had released some official video of the weekend’s show in Lisbon. The two clips that I saw, one of the classic “Shoot to Thrill” and the newer song “Rock or Bust,” were interesting to say the least. Axl fractured his foot (can you believe the luck?) and was forced to his awkwardly in a rock throne for the performance. It should be noted that this throne was NOT the one used by legendary rocker Dave Grohl when he hurt himself on the last Foo Fighters tour. Watching Axl bob his good leg up and down while his injured foot was propped up came off way less cool than when Grohl sat though shows. Worse, seeing the geriatric members of AC/DC run around the stage like adolescent school boys was strange. People are always saying that the younger generation just isn’t as good/tough/whatever and this visual kinda made it difficult to argue with that sentiment. Axl should have been the Spring chicken injecting life into the band…but instead he seemed older than Angus. 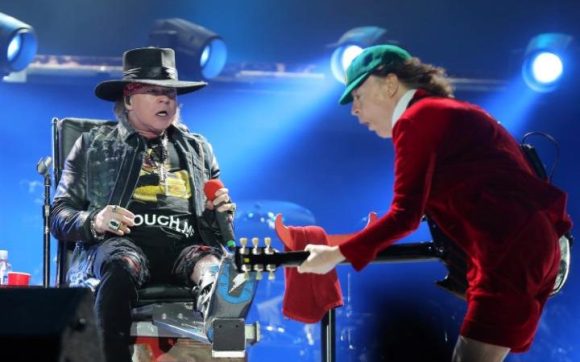 Oh man, there is no beating around the bush…this sure doesn’t look very cool.

But all this cosmetic stuff isn’t important if the band sounds great, right? The videos released didn’t have the best sound quality, but it doesn’t seem like Axl sounds right. He’s doing his usual screaming thing, which these days sounds a bit less-than-stellar if I’m honest. Also, he’s doing this weird thing where he’s singing like he’s in GNR sometimes and then at other moments kinda doing a Brian Johnson impression. I don’t think he’s succeeding in walking the fine line between honoring the sound of AC/DC while at the same time coming at these classic songs from his own unique voice. I’d love to know what exactly he’s going for with these performances. As far as these official recordings go, I think he’s generating a sloppy mess that doesn’t tickle my fancy as an Axl Rose fan nor as an AC/DC fan. That said, if I had to see AC/DC without Brian Johnson, I guess I’d want to see them with the absolutely most famous signer available. And, if I’m being honest, if a live album of this material was/is released I’d most certainly give it a careful listen (or three). This isn’t unlistenable dreck, just not as impressive or cohesive as it could be. I’m stunned that so many people are writing about how great this show was and the what a stellar job Rose did. My guess is by not totally sucking,  people are impressed. My expectations were higher than most, which is why I’m not super impressed with what’s appeared officially online.

Also, and I feel bad writing this…but if I paid a ton of money to see Guns ‘N Roses and had to watch Axl flop around in a chair I’d be pretty disappointed. This stint with AC/DC is such a train wreck that the bum foot adds an extra dimension of WTF-ness to the whole proceeding. I feel bad every time I say or write this if I were AC/DC, I think I’d finish up the tour and call it a day. There certainly is no way they are going to be able to top a seated Axl Rose. I feel like there is going to be a really interesting book or documentary about all of this one day…that interests me more than anything else about this whole situation.