I’ve been interested in Brian Wilson every since I snagged a copy of PET SOUNDS from my uncle in Tennessee about 10 years ago.  I’d always been of the mind that The Beach Boys were the lame-American answer to The Beatles.  And while 90% of the Beach Boys music is cringe-worthy and almost embarrassingly bad at times…there was a period in the early 1960s when Brian Wilson was the greatest songwriter on Earth. 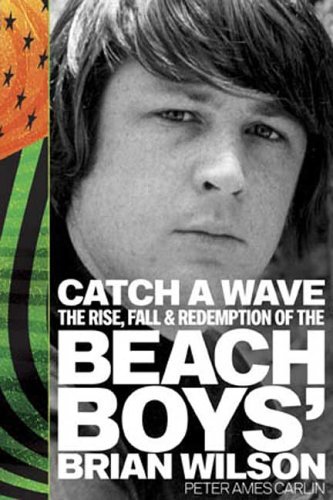 PET SOUNDS is one of my all-time favorite records, and it’s always on my iPod.  That record speaks to me in so many ways and on so many different levels.  The next Beach Boys album after PET SOUNDS was going to be even better.  It was going to be stupendous and change rock music forever.  And then–?–something happened and he became a complete nutcase.

What happened after PET SOUNDS became the stuff of legend, however, but not the way Brian Wilson, or anyone for that matter, would have wanted. Rather than recording a masterpiece he lost his shit and the entire album was shelved after being hyped by the record label for over a year.  That mythic, lost album was SMILE.  The Beach Boys next album would ultimately be SMILEY-SMILE, a watered-down version of what many claimed was the Holy Grail of ’60s rock.

Drugs, psychosis, greed, selling-out, and not measuring up to one’s potential.  Did I leave anything out? The story of Brian Wilson has always fascinated me.  So I picked up Peter Ames Carlin’s book CATCH A WAVE: THE RISE, FALL, & REDEMPTION OF THE BEACH BOYS’ BRIAN WILSON even though I’d just read a book last year covering The Beach Boys.  I didn’t really learn anything new, other than a few nasty tidbits about Brian’s cruel father Murray (this book alleges that Murray’s abuse cost young Brian his hearing which is not the story I heard in the other book I read last year).

CATCH A WAVE goes in chronological order and paints a pretty good portrait of Brian Wilson’s early life and initial success.  The book gets a little boring when it’s subject loses his mind and stops working.  You would think that writing about a rock ‘n roll lunatic would be an instant grandslam–but reading about a guy getting fat and growing a beard ain’t all that interesting.  For that reason the middle of the book becomes less about Brian and more about The Beach Boys artistic and commercial success-post Brian (or rather, the lack of that success).  I guess the author had no choice but to reduce Brian’s presence in the book near the middle when Brian reduced his presence from reality.  I do wish the author would have talked a bit more about the Brian’s shelving of SMILE, specifically his belief that his song “Fire” was causing fires to break out across LA.  I also would have like for him to go into more detail about the Brian Wilson/Charles Manson connection.

The book, which is fairly recent, covers the re-recording of SMILE Wilson did a few years ago.  The author raised a few good points about whether this new SMILE should have been released at all, and what (if anything) this recording of SMILE might have done to the “legend” of SMILE.  I found that last part of the book to be really interesting and thought-provoking. As a metaphor, the album’s release totally kills SMILE.  That bummed me out.  I’m ashamed to say that it bummed me out more than reading about Brian’s abuse as a child or even the decades he wasted sitting around the house doing nothing.

Overall, I would recommend you read this book if you are interested in reading about Brian Wilson or if you don’t feel like you hate Mike Love enough.  Seriously, that guy comes off as a total asshole.  My favorite part was when he was bad-mouthing PET SOUNDS when Brian was trying to get the band to record it…only to back peddle years later and claim the entire thing was his idea, Mike Love comes off as Rock’s biggest asshole.  And you thought you had bad cousins.

CATCH A WAVE gets 3 out of 5 kicks of Mike Love’s balls.