Why PET SOUNDS Means So Much To Me

For the past few years I’ve wanted to write an epic, all-encompassing essay about The Beach Boys’ classic album PET SOUNDS.  I’ve sat down on at least two occasions and actually started, only to give up in disgust.  It seems like everything that could be said about has been said, by people far more knowledgable than myself, so why bother? Because I can’t stop listening and thinking about PET SOUNDS.  My adoration for this record has long since moved past obsession and I guess I want to try to make sense of how that happened.

Like all good art, PET SOUNDS is best described as a reflecting pool–esthetically beautiful and mirror-like in that we can see some of ourselves within it.  Sorting fact from legend in regards to it’s creation/recording is almost beyond impossible at this point.  It’s all too easy to say that PET SOUNDS is the singular work of one brilliant, tragic genius.  As an American, the notion that a complex, challenging piece of work springing from one rebellious individual is both romantic and affirming of our continental-myth of the “lone cowboy.”  On the other hand, the years have been kind to PET SOUNDS, much kinder than many of the people involved in creating it could have ever imagined, as a result many people have stepped up and claimed credit for an album they openly ridiculed during it’s inception. 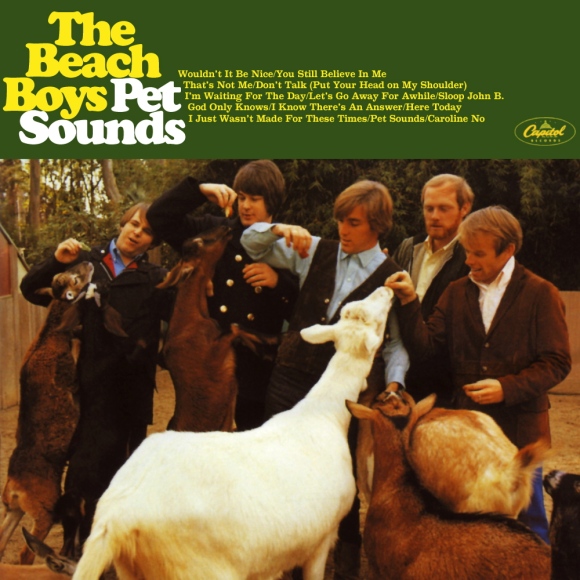 Such a lovely album...such a terrible album cover.

PET SOUNDS is sort of the bastard son few people wanted to acknowledge at it’s birth–but later, as it matured and did good by itself–well, then many were practically falling over themselves to establish themselves as it’s parent. Does it matter that Al Jardine may or may not have insisted The Beach Boys include “Sloop John B” on the record? Or that he (or Carl) may have been solely responsible for it’s amazing arrangement?  At this stage in my life, my appreciation for PET SOUNDS, I don’t care about these matters.  All that is important for me is that PET SOUNDS exists, vacuum sealed from time and the bitter in-fighting of songwriters, musicians, arrangers, producers, studio technicians, and hangers-on.

Released in May of 1966, PET SOUNDS did not exist for me until the early 2000’s when I happened upon it in my Uncle’s CD collection.  I was in Nashville, trying figure out (among other things) who I was and what the hell I was doing.  I gave it a brief listen, made myself a copy, and promptly forgot all about it.  I’ve always been a “Beatles person.”  Growing up, The Beach Boys were that lame, striped-shirt-wearing novelty band that briefly styled themselves as “The American Beatles.”  People (mostly rock critics from Rolling Stone magazine) would, from time to time, blow my mind by placing PET SOUNDS near the top of many “Best Albums” lists, but otherwise–The Beach Boys had little credibility.  The only place I ever heard them was on the local golden-oldies radio station, placed strategically between Herman’s Hermits and Sam the Sham and the Pharaohs.

I still cannot recall exactly what compelled me to dust-off my copy of PET SOUNDS, but around 2008 I did.   Almost everything stupid (for lack of a better word) about The Beach Boys is missing from this record.  There are no dated, lame-ass novelty songs about surfing or hot-rodding.  No, PET SOUNDS is 13 songs about love, the confusion of youth, self-doubt, self-realization, loneliness, and also “Sloop John B” is tacked on (thanks Al/Carl).  The music is lush, full of complex and achingly beautiful arrangements.  Lyrically, the PET SOUNDS is almost the exact opposite of the music–the lyrics are so simple they sometimes strike me as slightly moronic.  I mean that in the best way possible, sort of like how people always remark how many startling truisms spring from the mouths of very young children.  The lyrical content of PET SOUNDS is simple but never basic, the observations aren’t plain and vanilla–but shockingly universal.

The album-opener, “Wouldn’t It Be Nice” is probably the most recognized track, and a perfect example of what I’m talking about.  The song is about first-love, not silly puppy love, but actual honest-to-god love.  Anyone that’s ever felt that for the first time can completely understand the song, which is about the yearning to essentially always feel that feeling by being able to spend every minute of every hour with your lover.  This song encapsulates a very real feeling I think just about everyone has had.  And even though the sentiment may not be smart or realistic, that’s not the point–“Wouldn’t It Be Nice” is an explanation for every stupid teenager who’s ever run off an gotten married.  Still, an album filled with this sort of idealized romantic love wouldn’t be emotionally satisfying or realistic.  PET SOUNDS takes things further than 99% of pop albums (up to that time and since) with the very next song “You Still Believe In Me.”

“You Still Believe In Me.”opens with a confession that the song’s narrator has completely fucked up–and yet she still loves him.  Here, the wonder is not in the bliss of love but the endurance of love.  He tries, promises, and fails…and yet she still believes in him. “That’s Not Me” is another song about failure, this time the song’s narrator has decided to give up chasing foolish, impulse (saying “That’s not me”).  More than just a song of redemption, what impresses me the most about “That’s Not Me” is the self-realization that one’s dreams (and their pursuit) can not only be harmful but also maybe the opposite of what we really want. Stoned or sober that’s a mind-blowing realization. 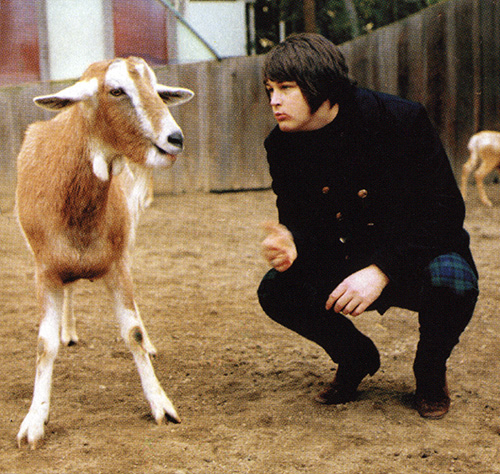 And then there is “God Only Knows.”  Not only is it hauntingly beautiful musically, but the it’s astonishingly rational while still being romantic at the same time.  Unlike a traditional pop-love song where the singer expounds about how he can’t live without the love of his life, “God Only Knows” acknowledges the fact that both he and the world would go on spinning without her, but he’s eternally grateful that he doesn’t have to be without her (because God only know where he’d be without her). I can live without you, but I don’t want to is infinitely more romantic than the foolish adolescent declaration of “I can’t live, if living is without you” (sorry Badfinger).  And you know, if PET SOUNDS was just about the complexities of love it would still be a damn good album–but it’s the introspective stuff that really pushes the album from “good” to “masterpiece.”

“I Know There’s An Answer” is about the search for the meaning of both life and self.  It’s about all those Nowhere Men sitting in their Nowhere Land, and how we ‘re all lost and adrift in lives.  There is no magic bullet answer that’s going to fix everything and make us happy, we have to save ourselves with our own answer.  Also, there’s no way of helping all the lonely people of the world without first helping yourself.

Lastly, there is the bittersweetness of “Caroline No.”  It’s the final track on the album, and it’s all about the terrible way time strips us of the things we cherish the most.   It’s heartbreakingly sad and every time I go back to my hometown I’m reminded of Thomas Wolfe’s “You Can’t Go Home Again.”  Again, it’s the comforting universality of the song’s sentiment that gives the song it’s power.  Rather than struggle for a cheesy  redemptive silver-lining, the “Caroline No” does us the public service of letting the listener know that that’s just how life/the human condition is.  Rarely does commercial art, let alone pop music, deal with just weighty (and frankly unpleasant) topics without resorting to some kind of cliched “happy ending.”  What do unrealistic portrayals of life and love really give us, beyond a fleeting bit of pleasure?  They doom us to even greater sorrow, hoisted up by a Hollywood endings none of us are going to get.  The braver thing, I think, is to stare at both our souls and our sorrow right in the face.  So in that respect, PET SOUNDS is probably the only mirror I’ll ever need.

Tagged "Caroline No", "God Only Knows", "I Just Wasn't Made For These Times", "I Know There's An Answer", Al Jardine, Badfinger, Brian WIlson, Carl Wilson, PET SOUNDS, The Beach Boys

9 thoughts on “Why PET SOUNDS Means So Much To Me”