METAL MONDAY: An Epic Review of “Dopesmoker” the Song the Label Didn’t Want You to Hear!

It’s been a long time since I did a METAL MONDAY post, and for that I am truly sorry.  In order to serve my penance for neglecting rock’s more aggressive-cousin, I embarked on an gargantuan journey that only the most die-hard music writers would even dream of undertaking**.  I was reading the latest issue of SPIN magazine (don’t judge, I bought a subscription from a woman at work who’s granddaughter was doing a magazine fundraiser) when I saw a small article about an obscure metal reissue that came out this month–DOPESMOKER by Northern California’s Sleep.  Sleep were active during the 1990’s and existed in that grey area between doom-metal and stoner-hard rock. I’d never heard of them, but what caught my eye was the fact that the album consisted of one single, hour-long track.  The album was recorded in 1996 but the band’s label, London Records, was appalled by the finished product.  And in a way, I don’t blame them–what the hell do you do with an hour-long song?  The band refused to let the song, “Dopesmoker” be cut-up into slightly smaller chunks and instead insisted it be released as one mega-track. This fight delayed the album’s release until 2003.

Thanks to the Internet, and a hearty fan-base, DOPESMOKER was reissued as the band intended: uncut.  I read a few accounts of the album’s production, and apparently the song had to be broken up a few session due to the limitations of recording technology at the time (a reel of studio tape could only hold 22 minutes or so).  With nothing but guilt over neglecting METAL MONDAY and extreme curiosity, I sat down and listened to the whole thing (below are my impressions/blow-by-blow of the song).

Stoners are usually annoying, ineffectual, or somewhere in between.  I fully expected “Dopesmoker” to be pretty much a boring wank-session, I was pleasantly surprised to find that it actually pretty damn good. The song is built upon a foundation of droning guitar and lyrics revolving around an ancient, yet spacey, marijuana cult.  The lyrics, like the song, are dramatically elongated, like a stoner taking a loooong hit off a bong. Musically, Sleep seem to be like a super-wasted/super-slow Black Sabbath. In fact, the entire time I was listening to “Dopesmoker” I was reminded of “Sweet Leaf.”  I also couldn’t get the image of a stretched piece of taffy out of my mind–I think that’s a pretty good comparison for this record/song: Black Sabbath, if Sabbath was a piece of taffy, stretched to it’s near-breaking point. 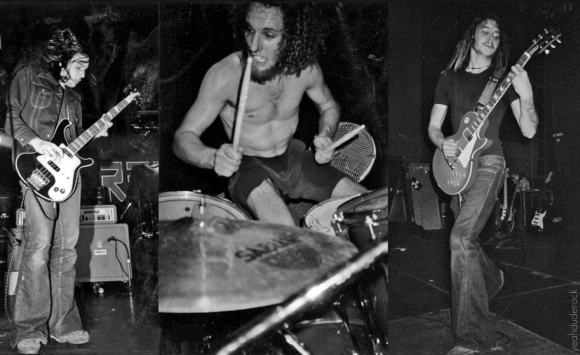 The song has three guitar solos that aren’t overly-long or stupid, another thing that surprised me about DOPESMOKER.  Metal guitar solos have a history of being supremely over-the-top to the point of being ridiculous, and in a song that’s over an hour long it would make sense to have really drawn-out solos to pad time.  But Sleep seem to side-step every single cliche I thought of when I initially read about this album/song.  The lyrics are pretty stupid.  I mean, really stupid.  This isn’t stoner-philosophy, this is crazy weed-mysticism to the 1,000,000th power.  They’re pretty damn funny and frankly work for me.  Had this song been long AND full of bullshit seriousness I’d have to label Sleep as pretentious.

“Dopesmoker” begins and ends with the lyrics “Drop out of life with bong in hand/Follow the smoke toward the riff-filled land.”  That Sleep not only created this riff-filled land, but let all of us mere mortals visit it is a good thing.  I won’t lie and say that Sleep’s magnum opus is for everyone, but for those brave souls willing to enter their ancient caravan of cannabis…adventure awaits.

What follows is a timeline of my thoughts written as I listened to “Dopesmoker” for the first time:

05:37: The droning has become an undulating current of a single riff, repeated.

12:42: We return to a more complicated version of the main riff.

16:40: Vocals commence again with “Proceeds the Weedian – Nazareth.”  I don’t know what any of this means…

21:30-ish: Main riff and drums fall off, single note riff (different from the beginning) takes over.  I feel as if the first phase of the song might be over.

22:53: Smashing drum riff and vocals return. The phrase “Holy Mountain Zion” is sung…all three words are sung in an elongated-howl.

31:15: The half-way point, nothing auspicious happens to celebrate this occasion, our “Stoner caravan” continues marching forward.

41:45-ish: Whole mess fades out with the exception of a single guitar.

42:00-ish: drums appear distantly, in the background, like a distant heartbeat.

63:15: Last notes are held and then allowed to fade. Not the bombastic ending I was hoping for, but it wasn’t a cop-out.

4 thoughts on “METAL MONDAY: An Epic Review of “Dopesmoker” the Song the Label Didn’t Want You to Hear!”