A few years back, Quentin Tarantino’s film DEATH PROOF came out (if you don’t remember it, the film came out as a double-feature called GRINDHOUSE).  Like all Tarantino flicks, DEATH PROOF had an amazing soundtrack.  I’m not sure how someone can possess so much obscure pop-culture knowledge, but Tarantino always manages to find awesome, little-heard/remembered songs that really enhance his films.  It’s a talent that fewer and fewer filmmakers seem to possess as time goes by.  DEATH PROOF uses the stupendously awesome “Hold Tight”  by Dave Dee, Dozy, Beaky, Mick & Tich for a particularly gruesome car crash scene.  I’d never heard of Dave Dee, Dozy, Beaky, Mick & Tich until this movie came out, which is pretty amazing considering I grew up on a steady-diet of classic AND oldies rock ‘n roll.

[ASIDE: Well I guess that’s only partially true,  George Harrison makes a cheeky (and fleeting) reference to the band on The Beatles Anthology 3, but I’d always thought this was a joke (come on, that name is pretty ridiculous).] 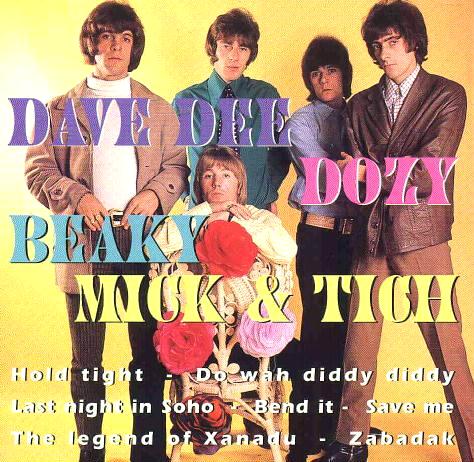 These men (or some of these men) recorded a monster.

Regardless, after I saw the movie I wanted to hear more from Dave Dee, Dozy, Beaky, Mick & Tich, but trying to find any of the band’s music is pretty difficult.  This despite the fact that they had several minor hits back in the mid-to-late 1960s.  I was finally able to track down a Greatest Hits compilation on Spotify, a music streaming service I reviewed a while back.  I was pretty stoked to hear more from Dave Dee & Company, so one day while at the gym  I hit “play” and settled into their trippy Who-meets-Beatles sound…I was really digging their music, when this awful sound filled my ears.  There was a terrible synthesizer coupled with an overall stomach-churning  early 1980’s production spilling out of my ear buds.

Now, it’s not uncommon for older bands to include little-heard (or appreciated) “come back” material on their Greatest Hits compilations, so while I was repulsed by what I heard, I wasn’t surprised.  But what  I thought was strange was that, despite being turgid, the song was strangely   familiar.  So familiar, in fact, that I found myself singing along with it.  How did I know this song?  Then it hit me: Cat Stevens.  Dave Dee, Dozy, Beaky, Mick & Tich (or more likely a band comprised of two of those people along with an accompaniment of  replacements) recorded a cover of Cat Stevens classic “Matthew & Sons” in the early 1980s! What?  What on Earth made them pick this song to cover?  And didn’t they know that disco was dead?

I’m not ashamed to admit that I like Cat Stevens.  That said, I wouldn’t call “Matthew & Sons” a great or terrible song–I probably wouldn’t call it anything, it exists somewhere in between for me.  But this version, this 1980’s abomination by DDDBM&T is pretty much the worst Cat Stevens cover I’ve ever heard.  It’s terrible because it takes a decent enough song and wraps it in a shitty 80’s dance-production.  And it does all this for NO GOOD REASON.  I’m not sure what the hell the band was thinking, there was no way they were deluded enough to actually think kids were going to dance to this….song…in the clubs (right?).  I’m hoping that this song owes it’s existence to super-large mortgage debts or killer coke habits the surviving band members had.

2 thoughts on “The Worst Cat Steven’s Cover of All-Time?”