A lot of people have the wrong impression of Thin Lizzy.  They weren’t the dunder-headed hard rockers that people think they were.  Thin Lizzy were rockers with heart.  And that heart came from lead-singer/songwriter Philip Lynott.  When a songwriter is dubbed a “poet,” I can’t help but think of doilies and Shakespeare…the truth this, a poet is someone who can take complex feelings and distill them in way just about everyone can understand.  It’s more than just pretty words.  I can write about love and explain it to you, but only a true poet will be able to not only describe love but also convey the feeling of love.  Phil Lynott was a poet and there was nothing stupid or dunder-headed about his work.

Thin Lizzy exploded when they released JAILBREAK in 1976.  They’d been doing their thing for a while but it was that album that put them on the map with songs like “Running Back,” “The Cowboy Song,” and of course “The Boys Are Back In Town.”  That last song in particular doomed Thin Lizzy by both setting their expected level of commercial success higher than the band could ever reach again while also providing Thin Lizzy with the means to indulge their bad habits*.  Just before Thin Lizzy called it quits, Lynott started his solo career.  His first album, SOLO IN SOHO, was released in 1980.  I think the album is a both astonishingly diverse and heartbreakingly sincere. 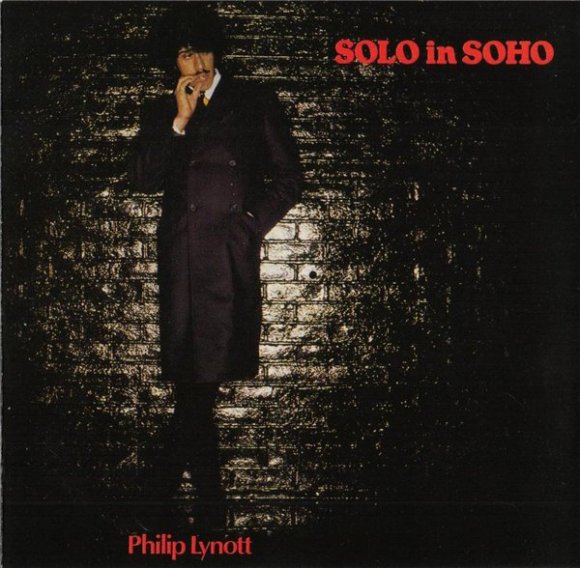 NOUN: A thing done by one person unaccompanied, in particular.

The first song, “Dear Miss Lonely Hearts” sounds like it would fit nicely on just about any Thin Lizzy album (which makes sense considering that Lynott’s backing band consisted of most of Thin Lizzy, along with Mark Knopfler from The Dire Straits, and oddly enough Huey Lewis on harmonica).  I really like this song, which is an awesome rocker about a guy who writes an advice columnist when he falls in love with his girlfriend’s sister.  As trashy and, frankly ridiculous, as that sounds “Dear Miss Lonely Hearts” doesn’t come off silly at all.  Lynott switches perspective back and forth during the song from the author of the letter and the titular “Miss Lonely Hearts.”  The ever complex and sensitive Lynott seems to sympathize more with women in the song than the confused Casanova.

“King’s Call” is another song that sounds like it could have appeared on a Thin Lizzy album.  It’s a poignant song about the singer’s reaction to the death of Elvis Presley.  Listening to this song today, one can’t help but draw an unfortunate parallel to Lynott’s own death in 1986.  It’s especially difficult to hear him sing about drinking “a bottle of wine and gin” when Elvis dies (Lynott died of complications from substance abuse). The song is bittersweet, however, because as Lynott attests in the song, “You can always hear the King’s Call” can also apply to Lynott and the amazing work he did.  I also find it a little funny that a ballsy rocker like Lynott so idolized Elvis.  I think a lot of people from my generation tend to under-appreciate Elvis and his cultural significance.

The rest of the album departs from what many would expect to hear from the lead-singer of Thin Lizzy.  “A Child’s Lullaby” is just that, a lullaby to Phil’s daughter Sarah.  The lyrics, which are simple but clearly from the heart,  are beautifully paired with an orchestral arrangement that’s as delicate as Lynott’s vocals.  I can’t think of a song further from “The Boys Are Back In Town,”  and it a way it bums me out that this side of Phil Lynott is not the one people remember the most.  As raucous and rebellious as Thin Lizzy was, Lynott was big softie at heart.   “Tattoo (Giving It Up All For Love)” is a super-catchy R&B number that also should have been a monster-hit**.  “Girl” is another R&B-like departure which manages to defy Lynott’s tough-guy/Thin Lizzy image.  Worth noting is the fact that this song, and “Solo in Soho” both feature a really weird spoke-word segment by this British woman who sounds a bit like a robot.  I’d say that that this one detail is the only blight on an otherwise awesome record (this woman does not know what “emote” means and speaks in the flattest possible manner).

SOLO IN SOHO is noteworthy for addressing the subject of race, something not really touched upon by Thin Lizzy.  On “Ode To A Black Man” Lynott seems both angry and filled with pride about being black.  It’s funny, but I never really thought about Lynott’s race growing up, he was just the dude from Thin Lizzy…but Lynott wasn’t a white guy.  I won’t pretend to understand the complexities of coming from a racially mixed background (especially during the 50’s and 60’s when Lynott grew up) but I find “Ode To A Black Man” fascinating.  It makes me wish Lynott had written more songs about his experiences of being black. 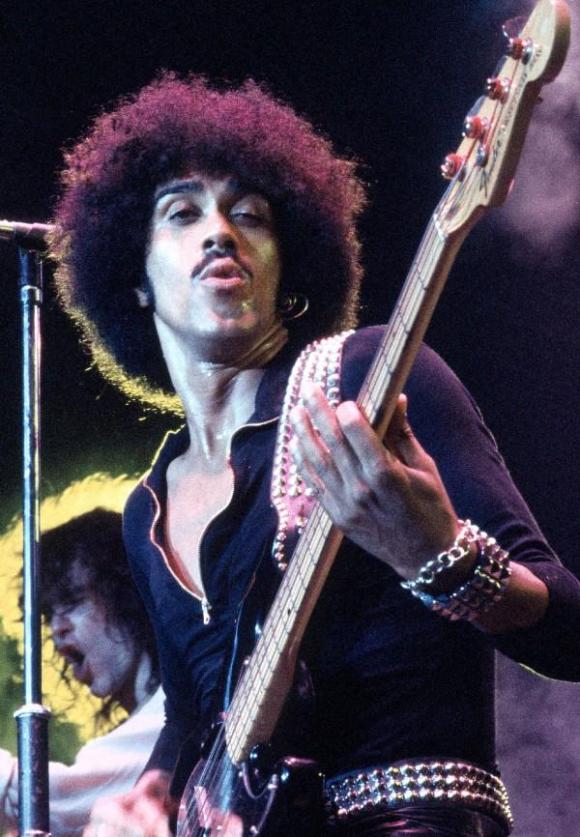 Blinded by Rock? Can you believe I never gave much thought to Lynott’s racial background?

“Yellow Pearl” is an awesome and a bit baffling bit of techno-pop.  It’s pretty much as far from Thin Lizzy’s classic rock sound as one can get, and yet it’s pretty fantastic in it’s own right.  I’ve listened to this song a few times and I’ll be honest…I have no idea what this song is about (if you know congratulations, you’re smarter than me, please tell me in the comments below).  It’s trippy and cool and ahead of it’s time/completely awesome, you really need to experience it for yourself.  The album ends with “Talk In ’79” which is an almost spoken-word piece about the music scene at the time.  As a piece of history it’s interesting, as Lynott name-checks Brian Eno, The Police, and Rockpile of all things.  In the last line of the song Lynott mystically says:

“This broadcast was brought to you in 1979

I’m just talking to you over these waves

Not just another time and another place

And before we knew it

The old wave was gone and controlled.”

An interesting fact that people don’t know about Phil Lynott is that he was friends with The Sex Pistols and was a champion of the early punk scene.  I find this curious because those same punk-rockers would be the same people who would eventually turn the tide against rock bands like Thin Lizzy.  “Talk In 79” seems like a critique on both the music press and the music “scene” in general.  I wish Lynott hadn’t died because I’d like to know what his reaction to music press in the digital age.  Genres are more splintered and the audience is doubly fickle.   An artist like Phil Lynott probably wouldn’t have been allowed to flourish and mature.  I can’t imagine an album like SOLO IN SOHO coming out today.  Lynott was a well-established artist but based on his previous work with Thin Lizzy, SOLO IN SOHO was a gamble.  Sadly, the album isn’t very easy to find today.  I wasn’t able to download it on iTunes or stream it on Spotify.  My local record shop didn’t have a copy, either, so the only way I was able to get my hands on it was to buy it from Amazon as a (gasp!) physical CD.  I find that a shame because there is so much good stuff on SOLO IN SOHO.  If you’re in a second-hand record shop and you see SOLO IN SOHO pick it up, it’s a fantastic record by an often overlooked artist.

*Both musically and pharmacologically.

**Interestingly enough, “Tattoo (She’s Giving It All Up For Love)” was covered by Huey Lewis & The News on their 1982 album PICTURE THIS.

One thought on “Classic Albums Revisited: SOLO IN SOHO”