I try to keep it positive here at Defending Axl Rose, but sometimes you have no choice but to be negative.  We’ve all been there: hot, sweaty, pressed up against complete strangers in a darkened room desperately waiting for your favorite band to take the stage.  But before they can rock your socks-off, however, you gotta sit through the opening act.  There was a time when I didn’t care much for seeing opening bands.  Most of the time, when you see a “big” artist in a “big” venue, you only have to sit through one band that you didn’t pay to see…but if you’re a club-rat, seeing a shitty band in a shitty dive, you usually get to see TWO opening bands.

1. Half-Empty: You got to sit/ stand-pressed-against-a-fat-guy-you-don’t-know through two bands you didn’t pay to see and probably don’t care about.

2. Half-Full: You get to sit/stand-pressed-against-a-fat-guy-you-don’t-know through two bands you didn’t pay to see and probably don’t care about.

Now what’s the difference? Your attitude.  Once I grew up and actually wanted to TRY and EXPERIENCE new things, I found myself actually excited to see what the opening bands had to offer.  In most cases the opening band is related, in some way, to the headliner.   That relation might be tangential at best*, but there is a relationship.  Once I started opening my ears and my mind, I found myself often walking out of dive-bars/clubs with a new favorite band.  In some cases, I actually liked the opening band better than the headliner.  Blasphemy? Only if you’re 13 years-old and you only want to hear the headliner’s latest hit-single.  Me? I’m a deep-album cut sort of fellow.

A few years back I took my wife to see The Kings of Leon here in St. Louis.  The Kings of Leon were good but the opening band, The Features, blew us both away.  We fell in love with them and they soon became her all-time favorite band.  We’ve since seen them five or six times because we love them dearly (and they tour like madmen).  Now, what if we’d have skipped the opening act? What if we’d showed up just as Kings of Leon took the stage?   The Features are the better band and the only reason we ever heard of them was because we showed up early for the concert and politely listened to a band we’d never heard of.  The sad part is, I think that happens a lot—and by that I mean really great bands opening for ones that are just “alright.”  In a perfect world, The Kings of Leon would be opening for The Features, not the other way around. 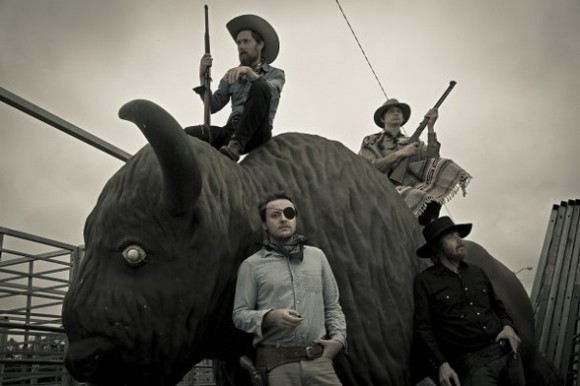 The Features, 1000% better than any headliner.

Want another example? I saw Rooney back in 2003/2004** and was really impressed by their opening band The Redwalls.  The Redwalls had better songs and rocked harder than Rooney***.  To this day, I own more Redwalls albums than Rooney albums and I feel that my life has been enriched by waiting patiently through an opening act that turned out to be damn sweet.

Of course, there have been some really awful opening bands I’ve had to suffer through.  The worst of all-time was a band called White Williams.  I was seeing Vampire Weekend (again with the wife) and White Williams was the first of two opening bands.  Actually, that’s not right…White Williams was not a “band” but rather two dudes in sweaters.  One had a laptop and the other had a guitar.   I’m all for experimental music, and I think there’s some really awesome stuff some artists are doing with loops and simple guitar licks, but these guys weren’t actually doing anything.  One guy just stood there with his guitar, looking like he was asleep, while the other dude dramatically pressed a few buttons on his laptop.  When I say dramatically, I mean this guy was pressing one button on his laptop every few seconds like he was Eddie Van Halen SHREDDING on a solo.  He had that intensity on his face like he was lifting the continent of Antarctica on his shoulders while at the same time working on a cure for cancer. In short, he was a acting like a complete douchebag: all he was doing was standing there with a sweater…pressing buttons. 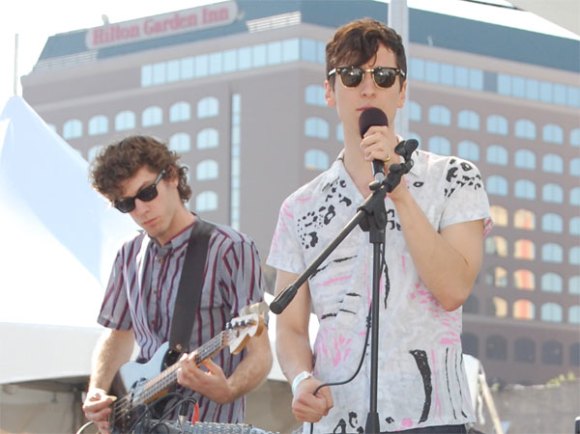 The lead-laptopist of White Williams, taking a rare break from lap-topping.

What does the name White Williams evoke? Does it make you think of bland, vanilla, anglo-static?  Well that’s what I think that name evokes for me, and it turns out that’s what White Williams sounds like.  They’re the worst, bland electronica you can imagine.  I seriously hope one of the guys in White Williams is in a relationship with someone in Vampire Weekend, because if having them on the bill that night wasn’t a John-making-Yoko-happy-by-letting-her-sing-on-the-album situation then Vampire Weekend are idiots****.  People often talk and check their cell phones during an opening band, but I saw people drift dangerously close to falling asleep during White Williams’ set.  I don’t think rock bands should do idiotic stunts, but you’ve got to do more to wow an audience than simply show up with your sweater and laptop.

Another mistake White Williams made was essentially play one song for twenty minutes.  During their set they said nothing to the audience, for all I know they really did only play one song.  The only reason I know they’re called “White Williams” is because the guy with the laptop mouth-breathed it once just before exiting the stage*****.

I know all of that seems pretty harsh, but you have to understand, I did not pay to see White Williams.  I didn’t make that choice, they were thrust upon me.  I think if you’re going to be in the ENTERTAINMENT industry you should, at the every least, be ENTERTAINING.  But there’s a bad apple in every bunch, and for the most part I still maintain that opening bands are worth your time and your respect.  Be an adult and let the White Williams’ of the world actually let you down before you completely dismiss them outright.

* Like they’re represented by the same management or were called last-minute to fill-in.

**It was a long time ago, I can’t really remember.

***Who eventually turned into a just okay pop band, which by the way is not a crime.

**** Read: I hope the dude in White Williams is blowing someone in Vampire Weekend.

****That’s a systemic problem in rock shows these days, nobody bothers so say who they are anymore.  I can’t count the number of really cools bands that get onstage, rock my world and then leave without adequately explaining who the fuck they are.  Don’t want me to buy your records, visit your website, blog about you, become your fan? Okay dude, good luck with that. TELL US WHO YOU ARE MORE THAN ONCE!!!

2 thoughts on “The Worst Opening Act”