The second album that AC/DC recorded, DIRTY DEEDS DONE DIRT CHEAP has an unusual release history. In this modern age of iTUNES and instantaneous/simultaneous global releases it sometimes shocks people to learn just how fucked up some band’s catalogs are. The best examples are The Beatles and The Rolling Stones. For whatever reason, there is a huge differences in album art, album titles, track listing, etc. on much of the these classic band’s output. This issue often creates a problem for international fans who invariably ask, “which is the official or canonical release for this band?” Oddly enough, The Beatles and Stones are (like in most cases) polar opposites. For The Beatles, the British releases are considered the “true” or “real” catalog. Thus, in the 1980’s when their records were converted over to CD the American public was…confused when the British LP’s were released on CD. Meanwhile, The Rolling Stones choose to have the American release act as their “official” cannon.

What does any of this have to do with AC/DC? Well, if you live in Australia or Europe DIRTY DEEDS DONE DIRT CHEAP was the band’s second album, and it came out in 1979. If you lived in America it came out in 1981 after the massively successful BACK IN BLACK record. This might seem like a little detail, but if you’re living in America and AC/DC puts out BACK IN BLACK as a tribute to their fallen lead singer, Bon Scott, with new vocalist Brian Johnson and a year later Scott returns on a “new” record…you might wonder what the hell is going on.

The following “Classic Albums Revisited” is true, only the names have been changed to protected the innocent.

The delay in the album’s release in America is all about taste. The good folks over at Atlantic records didn’t get, probably couldn’t get, songs like “Squealer” or “Big Balls.” What they could ‘get’ was the piles of money the band made after Johnson’s death when BACK IN BLACK hit #4 on the US record charts. What’s amazing, however, is the success of DIRTY DEEDS. It went on to reach #3 here in the US, making it the highest charting AC/DC album.

This of course just goes to show you that the suits at the top have no idea what the hell they are doing.

I first heard AC/DC growing up listening to classic rock radio with my parents. I never really noticed a difference between Brian Johnson and Bon Scott. As an older, more critical listener I can separate the two (Scott having a slightly higher register than Johnson). Many consider Johnson to be an imitation of Scott, but I don’t think that’s very fair. However, as a music geek/nerd I have to love the original line-up more.

Growing up, I only knew one person in the whole world that liked AC/DC, a kid named Josh that lived over on the next street. I remember him showing me his CD collection before class in 8th grade. Our teacher was one of the younger teachers at our school, she happened to be walking by when he was showing me his collection:

“Oh, AC/DC…they were popular when I was in High School. I can’t believe people still listen to them.”

She had a nasty, slightly disgusted look on her face. Like we were looking at a Playboy instead of a stack of shiny plastic discs. I can’t really say I blame her, there is something inherently…dirty about AC/DC. Oh sure, they sing about the usual sex, drugs, and rock ‘n roll…but that’s not quite what makes them seem so…’brown bag.’ For me, and I suspect lots of people, AC/DC is a bit of ‘brown bag’ bag. You know, the sort of thing you buy looking down at your shoes. The sort of thing you stuff under your mattress.

The album’s title track, “Dirty Deeds Done Dirt Cheap” is one of the most cinematic rock songs I’ve ever heard. Every time I hear this song, a roaring advertisement for a dubious, back-alley problem solving service, I can see the vicious High School principal. I can see the cheating boyfriend who needs his ass kicked. The bitchy woman that needs to be put in her place. All of these people harass us throughout our lives– how often have we wished for a tough-talking wise guy to appear and magically “solve” these walking-problems by kicking some ass? The only thing better is: this service is surprisingly affordable (dirt cheap).

“Big Balls.” I’m sure there are a few of you reading this that have never heard this song. And I bet just by reading the title you have a pretty good idea what this song sounds like. Right??? Wrong. Oh sure, AC/DC could have gone all low-brow and written a song about how big their balls are. They could have, but they didn’t. Instead, these (seemingly) dunder-headed rockers form Down Under have crafted a shockingly up-scale double entendre. A song that’s both rockin’ and 10X funnier than any Weird Al song.

The Chuck Berry-esque “Rocker” is an awesome, breathless song that clocks in at only 2:52 but manages to perfectly encapsulate everything about rock music. That this track is so perfect (and yep almost haphazardly dashed-off) is surprising…but not as surprising as “Ride On.” Think about AC/DC and what do you think of? Loud. Balls-to-the-walls rock, right? “Ride On” is a quiet, introspective cowboy song. It’s my favorite track because of the vulnerability in Bon Scott’s voice, the regret and yes…heartache in his soul. At five minutes, it’s too long for radio-play (and was thus, never released as a single) but in my book ranks as one of the greatest rock ballads of all time. The guitar solo starts at 3:40 and goes all the way to 4:47. It’s not a complex or blistering solo, but like great bluesman of the past, Angus Young astounds by somehow conveying real human emotion through thin steel stings.

It’s an amazing, beautiful moment and it’s on an AC/DC record. 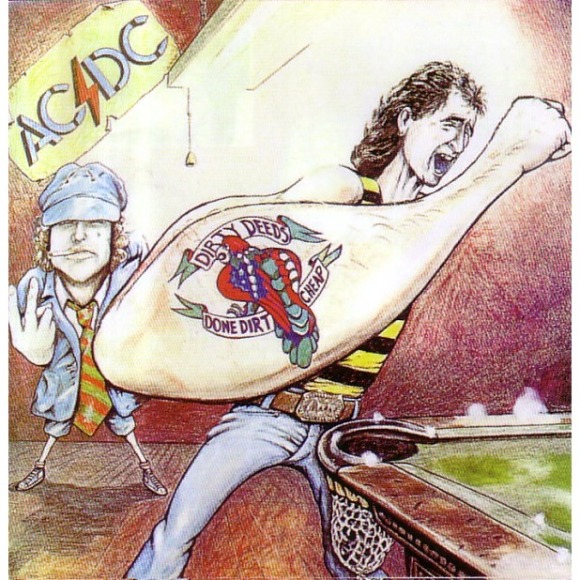