I understand that this is now old news at this point, but I’ve been unable to write about Axl Rose’s recent appearance on Jimmy Kimmel.  Part of the reason was that I was horribly stranded in New York City during the recent super-storm/clusterfuck.  But another part was my brain’s slowed reaction to the appearance. 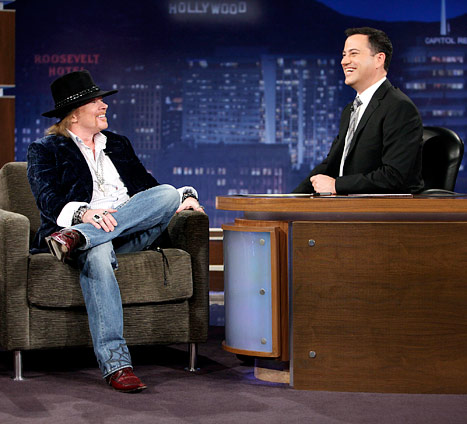 Axl was appropriate for the entire interview, except for his stupid hat.

On one hand, I found Axl’s first major TV interview to be a colossal disappointment and a great relief.  It was disappointing because Axl looks like someone’s bloated dad.  Look, I’m a fat, nerdy music writer so I can say it:  Axl used to be a rock adonis, and now he’s pudgy old guy.  The hat was also stupid.  I know it’s not cool to be balding or whatever is going on under that hat…but for crying out loud Axl, that hat makes you look insane.  It’s easy for me to say own your baldness when I still have a head full of hair, but I think it’s pretty vain when rock stars refuse to take off their hats/headbands.  You know who my all-time rockstar hair hero is? James Taylor.  James Taylor went bald and took it like a man. He didn’t bother with any coverup or conspiracy, he was like “this is what my head looks like.”  Kids today might not think it ballsy but there was a time when James Taylor was known for his giant mane of hair.  He wasn’t a hair-metal guy by any stretch, but he did have nice hair.

But I digress. This post is not about hair.

So Axl’s gotten old, I can deal with that.  The bigger disappointment was also the thing that gave me tremendous relief: Axl Rose wasn’t insane or weird (hat not withstanding).  He was plainspoken, friendly, and engaged in talking with Jimmy Kimmel.  Kimmel even made a point of saying how surprised he was that Axl was talking to him during the interview.  The pictures of Axl’s Halloween Tree and his story about how he likes to see kids freak out when they see it was cool.  Some might say that the critical and commercial failure of CHINESE DEMOCRACY has humbled Rose, and that’s why the man we see is so down-to-earth and normal.  But I don’t see it that way.  The way I see it, Axl without all the bullshit is just a normal dude like you or me.

I’m sad that he wasn’t bizarre and we didn’t get some crazy sound bytes out of the appearance–but mostly I’m glad to see that Axl isn’t the douchebag the media have portrayed him to be.  On a side side note, I was glad to see The Whigs perform later on in the episode (I’ve seen them live a few times and they’re awesome) but I was REALLY REALLY sad that Guns ‘N Roses didn’t play a song instead.  How awesome would that have been?

Lastly, the reason we got this odd bit of Axl publicity: the Vegas shows.  Had I not just spent all my money and remaining vacation time stranded in NYC, I think I’d actually go out and catch one of the GNR Vegas shows.  In a perfect world, the last show of the band’s month-long stand would be televised or streamed online AND we’d get a Live Album released next year.  But the reality is: after these shows, the US probably won’t see Axl or Guns ‘N Roses for a while.  Maybe I’m wrong, I hope I am.