About That Paul McCartney/Nirvana Song

Last night a pretty incredible benefit concert was held at Madison Square Garden to help victims of Hurricane Sandy.  This so-called “12/12/12” concert was jam-packed with tons of talent: The Rolling Stones, Bruce Springsteen, Bon Jovi, Eric Clapton, and The Who were there just to name a few.  Of course today all anyone can talk about is Sir Paul McCartney and the surviving members of Nirvana. Apparently Nirvana and McCartney got together and recorded a song for a documentary Dave Grohl put together called SOUND CITY.

The song’s called “Cut Me Some Slack” and it’s surprisingly not the horrible train-wreck you’d expect from a Paul McCartney-fronted Nirvana.  Not that there’s anything wrong with either Paul or Nirvana, it’s just not two things I’d expect to go together very well.  Sure, Cobain worshipped The Beatles and infused his own music with their unique pop-sensibilities (although he made them heavier) but when I think of Nirvana I don’t think of The Beatles.  Whereas The Beatles were very much a peace and love band, Nirvana was angry and moody.  Plus, McCartney is really getting up their in years and I’ve always associated Nirvana with youth.  Destructive, unbridled, youth. 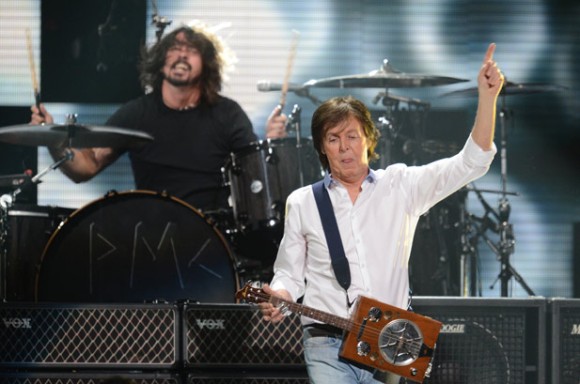 I guess maybe that’s why “Cut Me Some Slack” works so well: this isn’t a young version of Nirvana.  Hell, this isn’t even really Nirvana.  Yes, I went there.  I realize that there are bands that can exist without their lead singer, but Nirvana sure ain’t one. Don’t get me wrong, it was really cool to see all those guys playing together again. It was especially nice seeing bassist Krist Novoselic on stage again, as he’s mostly dropped out of the music world, opting to direct films and study law.

Had the song sucked we could have blamed McCartney for being too old and for mucking about where he didn’t belong.  Thankfully the song is good enough, and their performance was energetic.  I was reluctant to write anything about this because I’m starting to feel weird writing so much about all these old dinosaurs of rock. I was looking over my Top 10 Albums of 2012 and I feel kinda strange about having so many classic rock artists on it.  Rock has always been about the here and now AND young people.  I’m not saying that old people can’t contribute to rock music or that rock artists should shut up (or be killed LOGANS RUN-style when they get to old) but the previous generation’s shadow is stifling this generations artists.

As if to drive this fact home, I got an email from Live Nation that really turned my stomach.  Take a glance at the upcoming concerts in my area:

Memories of Elvis? An Allman Brothers Tribute?Dark Star Orchestra (which is a Grateful Dead tribute)?  Not only are these older acts not going away, when they do (usually only when death intercedes) we are then given tribute bands to fill their places.  Why in the hell aren’t we just going to see new bands? I’m just as guilty as anyone.  In fact, the next concert I’m attending is a Pink Floyd tribute. Just like the film industry won’t let old franchies go, the music industry won’t let old brands die.  And make no mistake, The Grateful Dead or Pink Floyd are nothing but brands at this point.  Three tribute bands/acts in a long list of upcoming concerts isn’t so bad, I guess.  And this is a Live Nation email, which is designed to goad aging hipsters into hiring a babysitter and having a night out.  I get that.  I also get that every night in this city there are awesome, young bands playing their hearts out.  I just wish the Nirvanas and the McCartney’s of the world would bow out gracefully and let them into the limelight.

8 thoughts on “About That Paul McCartney/Nirvana Song”