“Walk Out To Winter” by Aztec Camera

Scottish rockers Aztec Camera are one of those bands that I came to really late. When I say that, I don’t mean that it was 1989 or 1995 when I started listening to them…it was about 2 years ago.  I discovered them in, of all places, a J.C. Penny Outlet store.  I was waiting around near the changing rooms, waiting for my wife and amid the terrible, terrible lite jazz and boring adult contemporary I heard “Walk Out To Winter.” 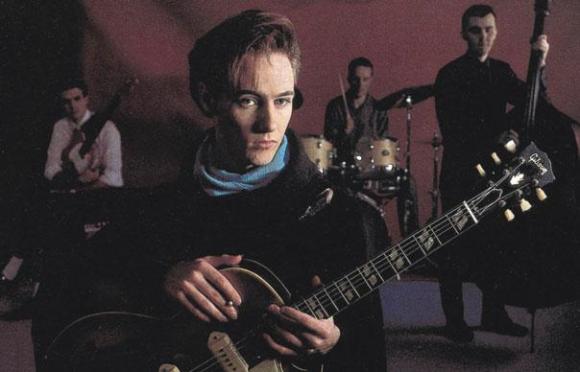 Aztec Camera about to take a snappy.

The song’s production is pretty dated, but delightfully New Wave-ish enough to save itself from being totally unlistenable.  Roddy Frame, the mad genius behind Aztec Camera, comes off just earnest enough: any less would be boring, any more would be embarrassing. I first thought I was hearing a really early Morrissey/The Smiths song, only because Frame’s voice has that beefy timber that’s similar to the Moz.

I was disappointed to find that HIGH LAND, HIGH RAIN, the band’s 1983 debut album, was a little hard to come by. But rejoice! This April will mark the 31th anniversary of the album’s release, and to celebrate Domino Records is putting out a remastered double-CD edition of the album. I got my copy in the cut-out bin of my local record shop, but I’m tempted to pick this one up.  HIGH LAND, HIGH RAIN is a fantastic record top to bottom. The single “Oblivious” is probably the album’s most notable track, but I really dig “Walk Out To Winter.”

I woke up this morning to a freshly fallen winter wonderland myself, and this song was playing in my head. If you haven’t checked out Aztec Camera, don’t feel bad just get with it and seek out HIGH LAND, HIGH RAIN.

One thought on ““Walk Out To Winter” by Aztec Camera”