About a week ago there was a major announcement in Defending Axl Rose-land: The Replacements were going on tour. Luckily for me, one of the stops would be my hometown of Denver. The band reformed about a year ago for a few festival dates, but I wasn’t able to attend any of those. This announcement was the second-chance I never thought I’d get. Once the initial thrill of a Replacements tour dissipated I was left with one thought: these tickets are going to cost a fortune.

Anytime a legendary band re-forms and goes on a reunion tour there’s a ton of money to be made. The Replacements broke up in 1991 and though they’re highly influential, I don’t know anyone personally who actually likes them. So I had no idea just how highly coveted would these tickets be. I’m a terrible judge of popularity—the larger populace more often than not greets the things that seem incredibly important to me with a resounding “meh”. Still, there was no way in hell I was going to pass up a chance to see The Replacements, so I resolved to see them. No matter what. Come hell or high water. *Insert other cliché here*.

My first move was to see when tickets would go on sale, so I hopped online and went to the band’s trusty website…which immediately linked me to LiveNation. Fucking LiveNation. When I clicked that link I swear my computer made a cash register sound. I won’t bore you with my own personal tale of poverty; I know that there are people worse off. But let’s just say that despite being paid a handsome salary as President & C.E.O of Defending Axl Rose Industries; I don’t have an unlimited supply of funds. Anytime I deal with LiveNation I end up spending double what I thought I was going to pay. Going on their website is akin to being pulled over by a police car. Scrolling through the website is just like rolling down the window and forking over my driver’s license. How much, I think, is this shit going to end up costing me?

LiveNation’s website indicated that The Replacements tickets were going on sale to the public on Friday but that there was a “Presale” the day before. Gripped with a nerdy fear that I might not get to go due to a lack of tickets, I instantly jumped on the hope that this mysterious presale offered. There was zero information explaining what the rules or requirements of the presale was, so I had no choice but to set a timer in my iPhone and check back at the time of the presale.

I know exactly none of you care what my opinion of presales is, but I’m going to tell you: I hate them. Essentially presales are insulting to most fans, rewarding the lucky few who possess a Visa Rapid Rewards Card or who belong to KQRC’s Morning Madness Fan Club. Want the privilege of buying overpriced tickets before anyone else? Sign up for our annoying ass mailing list. Despite being such a massive music nerd, I have no love for fan clubs and don’t think I should have to give the Kaiser Chiefs my personal info to score tickets to their show before all of you other sweaty basement dwellers.

When the day of the presale came I hit up LiveNation’s website to see if they’d explain what hoops I’d have to jump through to score tickets. It turned out the presale wasn’t for a credit card or fan club I didn’t belong to…it was for a local radio station and users of the LiveNation app! The idea of downloading a free to app to score a code to buy tickets a day early didn’t seem so bad. I went to the App Store and quickly downloaded the app. Then I spent five minutes or so setting up an account with the app. Then I navigated to the Replacements concert within the app, thinking there I’d be allowed to purchase tickets for the show. Nope.

I was treated to a rage-inducing notice that tickets would go on sale the next day. Well played, LiveNation. The whole purpose of the app-only presale was to get me to stupidly download their app and give them my information, which I happily did. Too bad I wasn’t paid in kind for my cooperation. I double-checked myself, just to make sure I hadn’t missed something. When I was sure that I hadn’t, I angrily deleted the app from my phone. Then I went back on LiveNation to see if I was confused or had missed something. The website insisted that as an app user I’d be provided with a code I could use for the presale. I resigned myself to having to wait a day to buy tickets. Then about 20 minutes later I downloaded the app for a second time and tried it all over again.

Pissed off and feeling foolish, I decided to double-down on the amount of time I was going to waste on this presale and went back to LiveNation’s website in order to file a complaint. At the very bottom of their page I found a FAQ/Help link. There I found a section about presales which offered this nugget of wisdom: 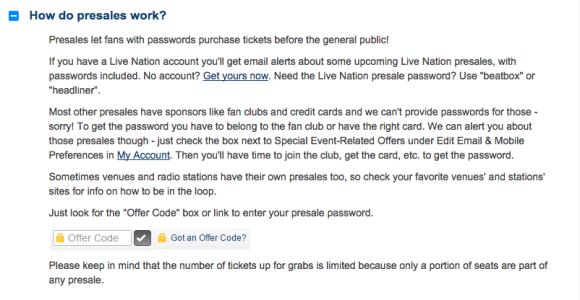 Guess what, LiveNation: FUCK YOU.

I couldn’t believe it, could it really be that simple? Did all I need to do was type “beatbox” and I’d magically be allowed to give them my money? Yep, it really was that simple. I deleted the app off my phone for the second time and swore under breath. Then I dropped $121 I didn’t really have on concert tickets. Much like songstress Jewel, these foolish games are tearing me apart.

I get that with this presale LiveNation wanted me to download and use their app, but without doing what they said it was going to do (i.e. give me a code to buy presale tickets) it makes it look like LiveNation doesn’t know what it’s doing. Being a multi-million dollar company, this level of incompetence casts LiveNation in an evil, manipulative light. So which is it, LiveNation are you incompetent or evil?

Sadly it doesn’t matter if they’re evil, because even though I wasn’t happy with them, I still gave them my money. What choice did I have? I guess I could have waited a day and half and gone down to the venue to purchase tickets, but I’m not even sure if I can do that anymore. And waiting on tickets can mean missing out on shows, especially when scalping computers swoop in to buy up all the tickets for those shady online re-sellers.

I can’t even remember the last time I bought tickets anywhere other than online. Much like cable companies, LiveNation and other giant ticket sellers have all us music fans by the balls. I love seeing bands play live, but I hate everything about buying concert tickets. As the music industry shrinks faster than the polar icecaps, I get understand that concert revenue has become increasingly important. I get that high tickets are paying for my evil, music streaming-ways. And if I truly love a band, I’ll pay way more than I should to see them in concert, but why do ticket retailers like LiveNation have to give me an electronic wedgie when I try to give them my money?