Five years have passed since Best Coast’s debut album, CRAZY FOR YOU, came out and lead singer-songwriter Bethany Cosentino is still bummed out. While nowhere close to approaching a Morrissey-level of depression, Best Coast’s songs are all pretty much about doomed love, unrequited love, broken relationships, and self-doubt. So why the hell do I love Best Coast so much? While the songs are sad, they’re catchy and sung in such a way that they come across as genuine without being embarrassingly earnest. Cosentino exudes so much hutzpah that even though she sounds sad, you feel like she’ll get over it and become a stronger person.

Now, don’t for a moment think that Best Coast is break-up music, because that’s not it at all. The songs are usually wistful with a don’t look back in anger kind of mindset. Best Coast is tragic love music that sometimes drifts into upbeat moments in the sun. Though Best Coast wears their California love on their sleeves, this music is the audio equivalent of Seattle or Portland. Dark, gloomy, but also filled with a strange Pacific optimism. I really dig this album cover, but where’s Snacks the Cat?

The band’s first album was a blend of early 1960’s girl groups and lo-fi shoegaze. Two years later, Best Coast released THE ONLY PLACE, the troubled second album that every band must struggle through. And while I wouldn’t call THE ONLY PLACE a disaster, I remember finding it a bit of a disappointment. There were a handful of standout songs like Beach Boys-esque title track and the solemn closing track “Up All Night.” But for the most part, THE ONLY PLACE was a bit of a step back for Best Coast. Indulgent and a bit too self-referential, there were songs on that second album that teetered dangerously close to parody (I’m looking at you “Why I Cry”).

When CALIFORNIA NIGHTS came out earlier this month, I was looking forward to listening to it but I was cautious about it’s quality. I really wanted CALIFORNIA NIGHTS to be great. I didn’t want CRAZY FOR YOU to be the band’s nadir, and luckily (for everyone) CALIFORNIA NIGHTS is the band’s best album. The band took a little more time recording their third album and it seems to have paid off. The songs are super-catchy like CRAZY FOR YOU but more polished/better produced like on THE ONLY PLACE. 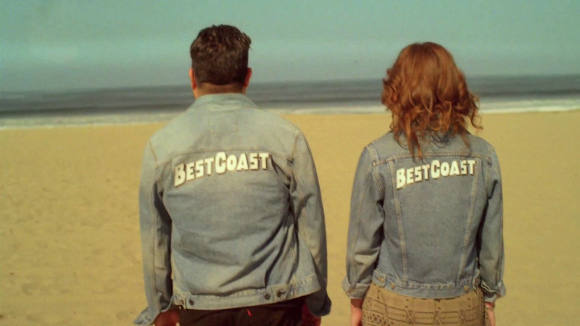 There it is, the actual “best coast.”

The songs are still sad, but they sound so fun. The best example of this is on the track “In My Eyes.” The track is bouncy and upbeat musically while being about the loss of a relationship. “In My Eyes” has a catchy, fun to sing along chorus…that’s absolutely devastating lyrically. I really like doubt-filled “Jealousy” with its classic girl group sha-la-la’s. I also dig the moody title track “California Nights” which continues in the group’s grand tradition of extolling the virtues of the Golden State.

The single “Heaven Sent” is the albums happy love song, something the band always tries to sneak onto each record. I’m grateful that its there. Special mention should be made for guitarist Bobb Bruno, who continues to provide interesting, lush guitar riffs for Cosentino’s beautiful grief. Though Cosentino gets the bulk of the praise for Best Coast’s music, Bruno is a key ingredient in what gives the band it’s wonderful happy/sad sound. CALIFORNIA NIGHTS is a great record and is going to be the perfect soundtrack to the summer. If you haven’t yet dipped your toes into Best Coast, CALIFORNIA NIGHTS is a good place to start. So next month, when you’re hosting your Lonely Hearts BBQ, throw on little CALIFORNIA NIGHTS. Don’t forget the sunscreen.