With a throbbing head and ringing ears, I sit and wonder where to begin when it comes to last night’s Metallica concert. For starters, the band sounded fantastic, and the show they put on was top-notch. It had been a long time since I’d attended such a massive concert and I forgot how nice it could be to surround oneself with so many rock fans. On the other hand, the sheer scale of the event was staggering, and while I can tell my grandchildren that I did, in fact, see Metallica, I only saw them as distant specs and projected on skyscraper-sized monitors. It wasn’t as bad as the time I “saw” the Foo Fighters in St. Louis with my back literally against the upper deck of the venue. Nothing will ever be that bad because I refuse to attend a concert with seats that bad. Still, the vibe was certainly different that most of the concerts I attend these days. Is bigger better? Normally I would say “no,” however Metallica’s show was so bombastic and well-done that I couldn’t imagine seeing the band in any way other than ‘larger-than-life.’

I walked down an urban bike/running trail from my office just outside of downtown Denver to Mile High Stadium. My first order of business was to get a lay of the land. Fans had been at the stadium since 4:00 pm that afternoon (for general admission floor seats), but I didn’t arrive on the scene until 5:00pm-ish. They had wisely set up a merch stand so people could buy shirts before entering the stadium. Because tailgating was allowed, I was greeted with the strange sight of metalheads cheerily swinging Coors Light while they chatted with the friendly policemen (and women) providing venue security. I waded through the sea of black t-shirts and made my way to Little Machine Brewing, a nearby craft brewery I sometimes frequent. 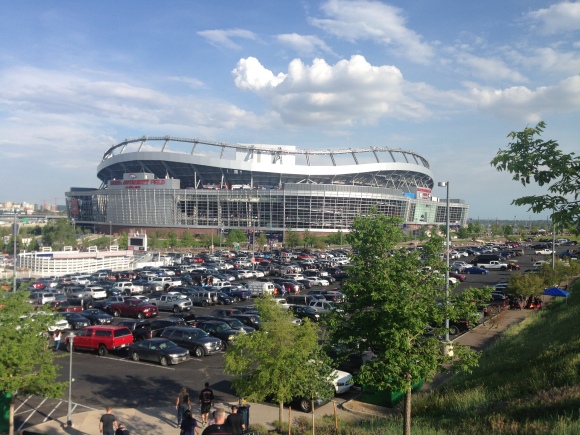 About halfway to the brewery, which is about three minutes walk from the stadium, I realized that it was going to be packed. And it was. Little Machine was completely taken over by metal enthusiasts getting their buzz on before the show. Still, I was able to buy a few beers and eat an (amazingly delicious)  plate of street tacos. If you’re in Denver, you’ll have plenty of options of places to get good craft beer, but I highly recommend Little Machine Brewing. Paying my bar tab, I headed back towards Mile High to begin the arduous process of getting inside. At least, I thought it was going to be arduous, but in fact, it was very easy. The lines were long but moved fast. Unlike many of fellow metal fans, I didn’t have anything resembling a weapon and was swiftly inside.

These tacos, which I got from True West Tacos, were so damn good.

I found my seat during Volbeat’s set. Volbeat is a Danish metal band that was very melodic and seemed like a fun group of dudes. I wish I could tell you more about them, but frankly, by the time I was settled in my seat their set was nearly over. I’d heard the band before and enjoyed what I heard, but I’m afraid I will need to revisit them at a future date before deciding if I like them or not. Once the stage was rearranged, Avenged Sevenfold took the stage. I only really knew the band from “The Beast and the Harlot” which was in one of the Guitar Hero games. People seem to be really divided about them online, for what reason I do not know. They seem like a slightly less generic modern metal band. They certainly didn’t blow me away, but I didn’t find them intolerable. Many of their songs blurred together, and I wasn’t even sure if they played the one song that knew. However, remember I was several beers into the evening by this point. 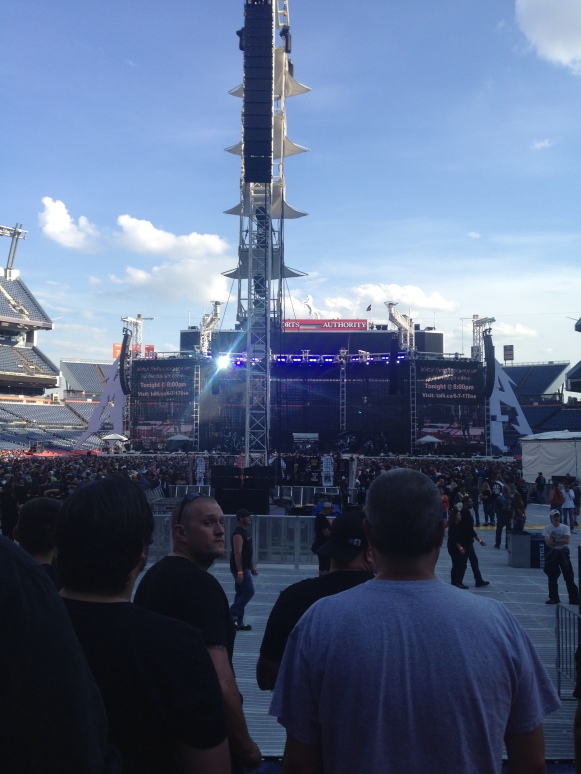 The view from my seat, I was very close to where the GA section began.

When Metallica finally took to the stage, it was dark, and the crowd had sufficiently swelled to an impressive “thousands.” They opened their set with the title track off their new album HARDWIRED…TO SELF-DESTRUCT! They immediately followed that up with another new song, “Atlas, Rise!” I was very glad that I’d gone back and re-listened to the new album, as part of me had expected a greatest hits-type show and didn’t think knowing the new songs would be very important. The band played a few more songs including “The Unforgiven” and “Creeping Death” before the night’s major snag hit. The band finished “The Unforgiven” and left the stage; a voice came over the PA and announced that the “show was not being canceled” but was “being postponed due to lightning.” During the first few songs a slight, not unpleasant, mist had begun to fall. By the time the band left the stage, it was starting to rain lightly. I didn’t see much lighting at first, but that might have been due to the band’s light rigs. 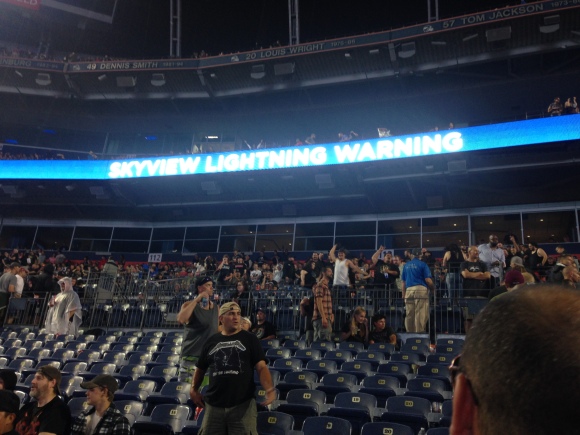 Notice the RIDE THE LIGHTNING shirt in the foreground. The humor was not lost on the crowd.

So, a band who has an album titled RIDE THE LIGHTNING took at 30-45 minute break because of a possible lightning danger. To be fair to the band, Mile High Stadium is huge, and the upper decks were filled with people who could have easily been struck by lightning. Not to mention the huge speaker/light towers the band had erected on the field. Still, there was much complaining as everyone huddled inside the stadium and wandered around buying things and drinking more. It was at this time that two over-priced stadium beers were purchased and consumed. I was thankful for the good (relatively cheap) beers I’d had at Little Machine earlier.

It was lightly raining.

Eventually, the rain cleared and the clouds parted. The band retook the stage, restarting their show with “Now That We’re Dead,” my favorite song off the new album. Metallica’s stage show consisted of laser lights, flame pillars, Hetfield growling, and some light fireworks. The real fireworks came in the form of Kirk Hammett’s blistering guitar work and Robert Trujillo’s fantastic bass playing. Hell, the band as a whole were top notch, sounding fantastic. Even though I paid too much money for my ticket, I still feel as though I got my money’s worth just because the band sounded so damn good.

There was one encore, which consisted of “Fight Fire With Fire” and, of course, “Enter Sandman.” Denver was only shortchanged two songs due to the weather delay and the strict curfew. A few minutes after midnight I was stumbling outside the stadium trying to decide the best way to get home. Dazed and confused, everyone seemed happy and satisfied with their experience. Also worth noting, there were exactly zero fights witnessed by me and no shitty behavior.I feel like metalheads get a bad wrap, but for the most part, they are peaceful D&D nerds who look scary but aren’t. I wore a Guns ‘N Roses shirt, only partially trolling, and no one said anything (I was expecting an “Axl Sucks” or two).

Squint and you can almost see them…

If you’re on the fence about seeing them, I would say “do it.” Pull the trigger and go, the show they put on is worth the money and who knows when/if the band will tour again. As far as dinosaurs of rock go, Metallica is definitely still hanging on to their prime.