I feel bad, but I’m afraid there is no way to discuss The Byrds–especially early Byrds–without talking about Bob Dylan. I just don’t think it can be done. So, before I get into the Dylan-ness of this record, let me talk about The Byrds themselves as a band. The Byrds formed in 1964 in sunny California. At that time the British Invasion was in full swing. What made The Byrds so interesting is that they combined the British rock sound with American folk music. In doing so, they pretty much paved the way for what we consider modern folk music–Joni Mitchell, Gordon Lightfoot, and Neil Young (along with pretty much all the singer-songwriter types from the 1970s “folk boom”) owe The Byrds a huge debt. At the same time, the band was pretty influential on the rock scene as well, without The Byrds there would be no Tom Petty. 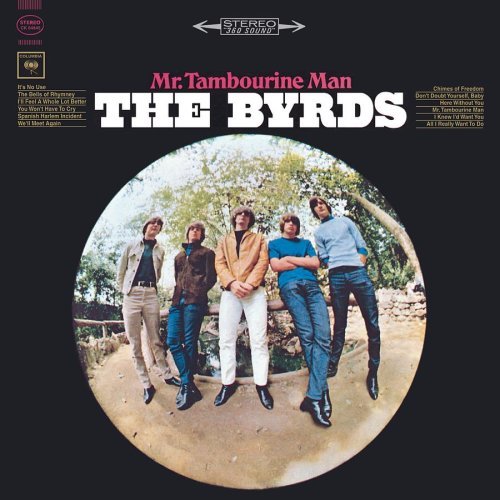 Byrds with a fisheye.

What’s so interesting about The Byrd (among other things) were all the various changes they made throughout their short existence (going from the folk-rock, electric Dylan covers to “Eight Miles High” THE first psychedelic rock song)  and the impact those changes had on a borad spectrum of artists.

The secret to their success was  their harmonies (of course) and Bob Dylan. The band’s first commercial hit was a cover of Dylan’s “Mr. Tambourine Man.” Dylan is a super-gifted songwriter, but unfortunately sounds exactly like a Muppet. This “Muppet-sound” tends to turn off a lot of people and doesn’t always best serve the song.  I’m a huge Dylan fan, don’t get me wrong, I love his croak but I know that I am in the minority.  Anyway,  beyond  having a better, more commercially palatable vocal arrangement, The Byrds also had a knack for interpreting Dylan’s songs, NOT just covering them. I believe there is a difference. A “cover” is just that, one artist playing another’s song–usually note-for-note.  The Byrds didn’t do this; instead they took a great fucking song, “Mr. Tambourine Man” and made it electric (with shiny, bouncy electric tones). They added layers of harmony. Listen to Dylan’s version and The Byrds, one right after the other…and it’s seems like barely the same song. Both are good (some will always prefer the author’s version because it’s the most “pure” or whatever, me I’ve out-grown such pretension) and both have the same level of merit–a sure sign that you’ve got a good, artistically executed interpretation on your hands.

With the success of “Mr. Tambourine Man” came an album–MR. TAMBOURINE MAN, this seems to me to be more of a  “if-it-ain’t-broke-don’t-fix-it” mentality cooked up by some record label suits but I could be wrong.   Besides the title track, the band also covers Dylan’s “Spanish Harlem Incident,” “All I Really Want To Do,” and “Chimes of Freedom.” There are other notable, non-Dylan covers on MR. TAMBOURINE MAN include “We’ll Meet Again” (remember that song? It was used ironically at the end of the Peter Seller’s comedy/farce DR. STRANGELOVE) and “The Bells of Rhymney.”

But it’s the Dylan covers that really wow me,  they’re all brilliant. I especially love “All I Really Want To Do,” a track the band injects with a much needed dose of levity. Dylan’s version is so damn bare-bones, and Dylan’s yodel-wail is a little bit…much (almost to the point of self-parody). The Byrds give a more energetic version. Dylan’s midnight-dark satire of a failing marriage goes down much smoother with The Byrds (hell, it almost sounds like a love song).

What surprised me most about MR. TAMBOURINE MAN was how strong the band’s original compositions are. Gene Clark’s “I’ll Feel A Whole Lot Better” is my personal favorite track–of the whole record (Dylan covers included). The band’s songwriting, while still in it’s early stages, was strong enough to compete with such a legendary song-smith. “You Won’t Have To Cry” and “It’s No Use” are likewise able to hold their own with Dylan’s songs.  Though MR. TAMBOURINE MAN has only hints of the work the band’s later (some might argue greater) work, I find this record to be thoroughly enjoyable and uncluttered with the excess of the later, “trippier” recordings. Unlike a lot of bands from this period, work The Byrds did on this album stands the test of time.