I’ve never before attended a festival concert.  That’s kinda strange considering how much I love live music, right?  Well here in the States, festivals aren’t quite as common as over in say, Europe.  In fact, the festivals we have here are pretty damn tame by comparison.  Back in their heyday, I remember seeing footage of Oasis shows overseas that had larger attendance than the population of my hometown.  I live in a mediuml-large American city, St. Louis, and though we are a college town, we really don’t get very many massive music festivals (I don’t count traveling travesties like Van’s Warped Tour or Oz Fest). However, thanks to a relatively new festival (this is the third year) St. Louis finally has a rock festival worth talking about.

Forest Park is the jewel of St. Louis.  That’s where our zoo and art gallery is located (both are free, both are awesome).  It’s a special place where St. Louis goes to return to nature and relax.  It’s also where I was married a few years back.  A festival concert located with the park is a great idea, and since I live within walking distance of the park (and I love rock) I decided to buy two day passes.  The bands this year are pretty good, I think.  This year’s headliners are Flaming Lips, Girl Talk, Dr. Dog, and Dinosaur Jr. Of the 16 bands performing this weekend, I’ve only see one live before–I saw Dr. Dog at an awesome, free in-store event at Vintage Vinyl many years ago (someday I’ll write a post about that with the footage I shot).

Anyway, I went down to the park right when the box office opened at noon to pick up our wrist bands (the Mrs. was along for this adventure).  Getting their super-early was nice because it gave us an opportunity to scope out the various vendors that had set-up shop.  Probably the best vendor was local record shop Euclid Records little “Festival Store.”  They had a nice fat stack of CD’s and *gasp* vinyl records for sale, representing all the bands on the line-up.  Other vendors of note were Sony, who had a PS3 mega-rig and Spotify (the killer-music service) had a big green bus where they were presumably trying to explain what the heck Spotify is. 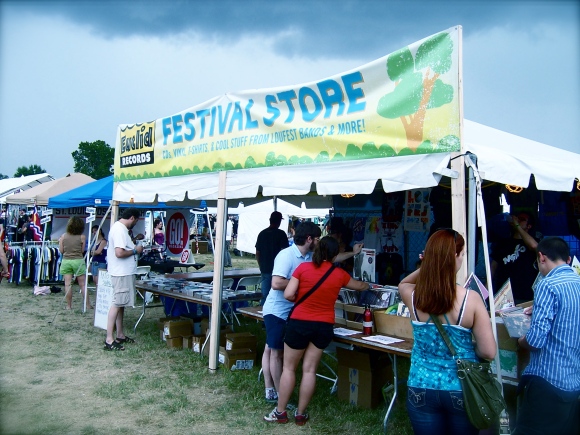 There was also a lot of really cool local restaurants and bars who’d come out to set up a little vending stall.  The place was a ghost town because it was so early so we took our leave until later that afternoon when around 4:00.  I felt bad skipping all the early Saturday bands, but I knew that because the majority of bands I wanted to see play tomorrow, I decided we’d better take it easy on Saturday.  After all, I’m getting to be a pretty old dude. 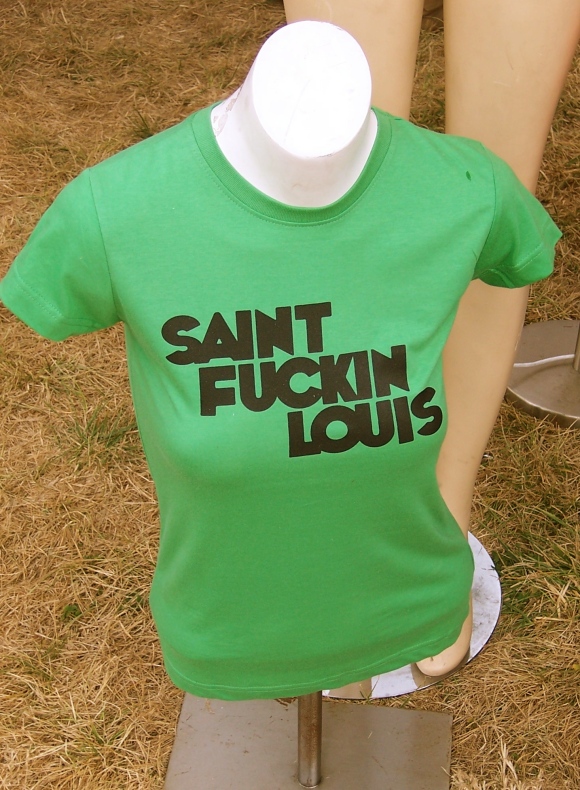 The skies, which earlier in the day had been bright and cheery, had taken on a nasty gray hue.  While we waited for alt-country dudes Son Volt to take the stage, the sky unleashed a ten-minute deluge.  Earlier it had been hot, now we were chilled to the bone with cold rainwater.  Such is life here in the midwest.  Anyway, it continued to drizzle off and on all night, but for the most part the major rain was over just before Son Volt came on.  I’d never really heard much Son Volt, but I found them to be pretty awesome.  As I get older, I find myself liking alt-county more and more.  With just enough (read: not too much) twang, I really enjoyed them.  The beginning of their set featured a lot of simple love songs, which I thought were the best.  My favorite was “Dynamite” of  their album AMERICAN CENTRAL DUST.  Another song I really liked was “Windfall” which struck me as being a bit Neil Young-ish. As they neared the end of their set list, the songs got a bit political/environmental, and I didn’t like them as much as the love songs.  Still, I thought the band put on a great show and helped provide some variety to the days music. 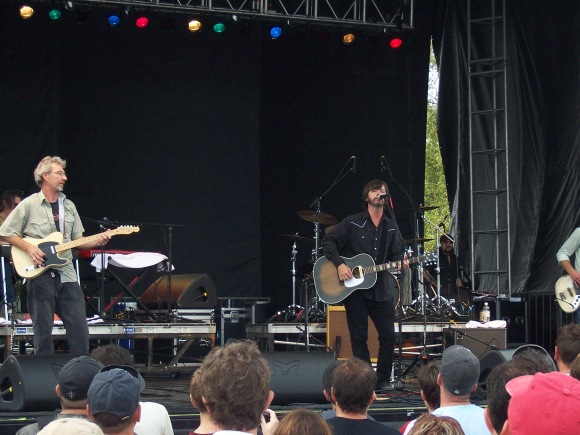 The next band was Dinosaur Jr.  Now I don’t know much about Dinosaur Jr., but I did enjoy their last album FARM when it came out a few years ago.  I especially liked their song “Ocean In The Way” off that record.  Did Dinosaur Jr. play that song? I honestly don’t know.  I don’t know because the band was so loud it was pretty difficult to tell. The band was surrounded by a fat stack of Marshall amps. To say that Dinosaur Jr. was loud is a terrible, terrible understatement.  They played their entire set at volume that can only be described as “Stupid Loud.”  Watching them, a trio of aging hipsters, was actually kind of magical.  The band seemed to spin a sonic cocoon around themselves.  Washing themselves and the audience in layers of eagle-scream guitar solos and a blizzard of effect pedal wah-wah, Dinosaur Jr. seemed to transcende age.  They played with the daring and the viciousness of  much younger men.  I won’t use the term possessed, but it did seem as though something overcame them, particularly J. Mascis.  Mascic, who looks eerily like Gandalf, whipped his long white hair life a madman, it was fantastic. Unfortunately, the sound system was cranked so loud that the only song I could pick out with any certainty was their epic “Feel The Pain.”  As their most famous song, it was met with a cheer from the mixed-age crowd (there was everything from toddlers to 60+). 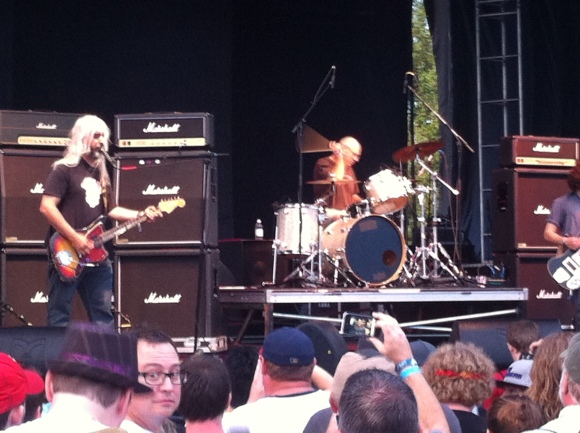 Dinosaur Jr. in the middle of making me deaf.

After Dinosaur Jr. finished their sonic assault on my eardrums, it was time for the evening’s headliner…Girl Talk.  Now, I’ve written about my rather mixed feelings towards Girl Talk before, so I won’t re-open that can of worms.   But for those that don’t know, Girl Talk is really just one dude, DJ Greg Gillis, who illegally samples the shit of the pop music songbook (without paying or asking for permission).  What sort of live “performance” could there really be for an act with such a schtick?  Well it was about what I expected: a nerdy white dude with a laptop, confetti cannons, balloons, toilet paper blowers, and a wall of LCD screens.  And yet, Girl Talk’s show was fun and funky, and it was just the palate cleanser one needed after the heaviness of Dinosaur Jr. The samples came fast and furious, and despite myself (and how tired I was) I found myself dancing.  Or at least, the closest approximation a fat music blogger can do. 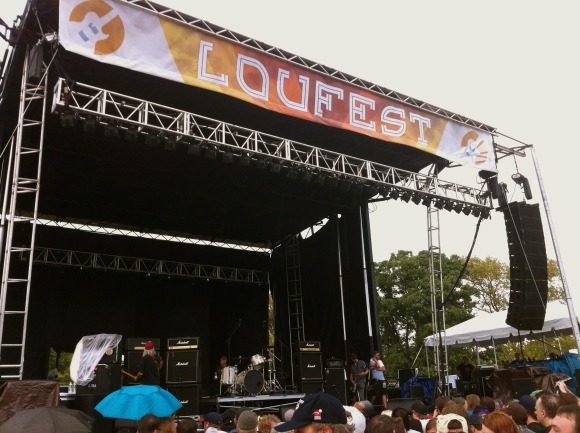 Overall, day one of LouFest was awesome.  My legs ache and my ears are ringing.  I can’t wait for tomorrow.

GIRL TALK & The Art of Sampling

So lately I’ve been listening to Girl Talk’s 2008 album FEED THE ANIMALS.  I know, I’m a little late to the party, but I’ve been busy.

For those unfamiliar, Girl Talk is really one a musician named musician Gregg Gillis who uses unauthorized samples.   Of course, that’s putting it lightly–Girl Talk’s music is damn-near 100% samples.  Now, I love a good mash-up as much as the next guy.  The thing is…there aren’t very many good mash-ups.  A mash-up seems like a really easy thing to create, song 1 + song 2 and you’re done.  But it’s more complicated than that, it takes a lot of time and effort to create a mash-up.  And it takes probably ten times longer than that just to come up with good/interesting song pairings. So understand, I’m not coming from a place where I think Girl Talk creating entire albums of mash-ups is easy or simple.  Gillis has talent, that much is apparent when you listen to FEED THE ANIMALS.  The songs swirls together, blending so seamlessly you literally need a scoresheet to keep track of what exactly you’re hearing.  Luckily there are people who have made such a scoresheet.

Why does Girl Talk hate that man’s lawn?

So if it sounds awesome and it’s not super-simple/requires some consideration what’s my problem? Why can’t I just let go and enjoy?

I don’t think it’s the fact that FEED THE ANIMALS is probably the most illegal record I’ve ever heard.  True, I think it sucks that he didn’t pay the respective copyright holders a dime in order to sample their music, I don’t really blame him.  I mean, for one thing, the number of samples is staggering.  A glance at one of the charts that detail the samples created by Girl Talk fans reveal a massive amount of samples–some of which are only a few notes others complete hooks or riffs.  But let’s pretend the guy had an unlimited supply of money and had asked for permission–many of the artists sampled on FEED THE ANIMALS probably would have said no. Do you think Ace of Base (or their copyright holders) want to be associated with DJ Assault’s song “Ass and Tities”? I don’t think so.  FEED THE ANIMALS features samples from several artists that don’t want to play in the digital age, like AC/DC, who don’t distribute their music in very many digital venues outside of iTunes (and they do that begrudgingly).  It also features Michael Jackson.  Do you think the Michael Jackson estate would let someone mash-up and mangle his music .  Rappers sample all the time, but what Girl Talk does is sampling taken to the next level. Artists that might not be unfavorable to a more traditional sampling (like Jimmy Page appearing on Puff Daddy’s “Come With Me”)  might not like Girl Talk’s 2% usage of a song.  There’s glory in having your stomping rock riff sampled or you chorus used, there is no glory in a few fleeting seconds.

I know that music is a business and that for the right price anyone will sell anything, but I can’t see FEED THE ANIMALS existing as a legal product.  But is it the illegality that’s holding me back from fully enjoying FEED THE ANIMALS?  I don’t think so.  I think ultimately Girl Talk is the harbinger of terrible things.  I recognize that what Gillis does is pretty awesome, but what he’s done is basically stand on the shoulders of giants.  As good as “Give Me A Beat” is, it’s nowhere near as creative as Tom Petty’s “American Girl” or Carole King’s “It’s Too Late,” hell it’s not even as creative as Brittany Spear’s “Gimme More” (all three of which are sampled in “Give Me A Beat”).  Taking something from nothing is infinitely greater than building on an existing  foundation (especially if that foundation includes Brittany Spears).  When a rapper samples he’s still written his verses if he hasn’t also created his beats.  What does Girl Talk create? It creates a julienne-cut jukebox.

FEED THE ANIMALS is a work of art and Gillis’ efforts is to be admired, but I can’t help but worry about the next step.  I can’t help but worry about a generation of kids that grow up listening to albums like FEED THE ANIMALS.  Will they bother to learn how to play instruments?  Will they bother with songwriting?  Or will they skip over a few dozen steps and create mash-ups of songs created by samples of other mash-ups.  I feel like Girl Talk is an evolutionary dead-end.  It’s like a platypus,  unique and interesting…so long as we still have other animals.