As we approach the “silly” season, my thoughts turn to shameless consumerism. I’m not a “reason for the season” kinda guy, but the older I get the more gift giving turns my stomach. A once proud element of fringe culture, rock ‘n roll has long be co-opted by “Big Gift.”

Earlier this week I fell down the rabbit-hole of tacky/puzzling/bizarre rock gifts. Here are my favorites.  And please, if I’m on your shopping list this holiday season…take notes.

1. Rolling Stone Brand Wine: I don’t know about you, but The Grateful Dead I always make me think of red wine. Rolling Stone, the purveyors of cool since before I was born, must have thought the same thing because they now have a line of classic rock-themed red wines that includes the famous jam band. There’s also a SYNCHRONICITY wine featuring the artwork from the Police album. And a DARK SIDE OF THE MOON-themed wine called, naturally, The Dark Side of The Merlot. The Rolling Stones wine, FORTY LICKS, feels like a cash grab too late (that compilation came out 12 years ago!!!).  The wine is red but could this be any whiter? If you’re a rock band and you want to put your name on a beverage (please don’t) at least make it a beer or whiskey.

Because when you think Jerry Garcia you think wine.

2. Holiday Sweaters: Nothing says the holidays like cold nights and warm sweaters. I personally own two: a way-too-big designer sweater I bought at a thrift store a number of years back and a nice charcoal-colored Hemingway I bought because I wanted to feel masculine. For the longest time I thought two sweaters was enough, but these music-themed sweaters have changed my mind. Can you believe there’s a MASTER OF PUPPETS-themed sweater?

Nothing says “Let’s celebrate the birth of Jesus” like an upside-down cross.

My friend Bianca is partial to the Wu-Tang Clan sweater, which admittedly does kick major ass: 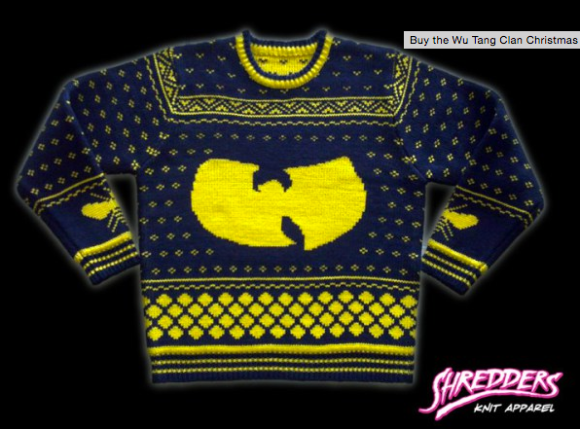 This sweater ain’t nothing to fuck with.

The Slayer sweater is probably the blackest, heaviest sweater of the bunch though. 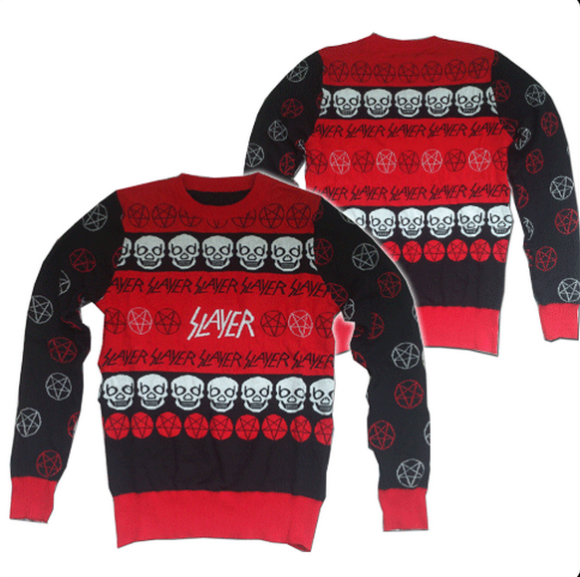 Is that snow outside? No, it’s RAINING BLOOD!!!

I hope they’re using wool from only the evilest, most brutal sheep they can find.

3. Merry Kissmas Blanket: We all knew that Kiss was going to be somewhere on this list, right? Kiss is without a doubt the most over-merchandised band in all of rock. In fact, the ratio of merch to music is probably so high kids today probably don’t even know that Kiss started as a band and not a brand of condom. I waded through a metric ton of crappy Kiss products and the one that made me laugh the most was this “Merry Kissmas” blanket. Can you imagine snuggling up beneath this thing on a cold Christmas Eve?  Gene Simmons is Jewish which makes this even more ridiculous. And “Kissmas” are you kidding? That’s some ballsy branding.

4. Daft Punk Action Figures: Kids today have it made. When I was a kid, I had to use my Chewbacca action figure as a stand-in for Worf (the STAR TREK character). When I played with my X-Men toys, Wolverine sliced through coathangers because they didn’t make toy Sentinels. The point I’m trying to make? Growing up in the late 80’s/early 90’s action figures were very protagonist-centric, meaning my Laura Dern JURASSIC PARK figure did a lot of double-duty (that is not a sexual pun or is it?). Anyway, kids today have access to action figure toy lines featuring thousands of characters. Every extra lurking in the background from the MATRIX sequels has his own figure.

The first rock band action figures I ever encountered was, of course, Kiss. I rolled my eyes and thought the notion of rock band action figures was stupid. But then I saw some really cool SGT.PEPPER-themed Beatles figures and changed my mind. I came close to buying those once, but I didn’t because I can never decide if I’m going to take them out of the packaging or leave them sealed up.  Anyway, the Kiss and Beatles figures sorta make sense…but Daft Punk action figures are too weird for me. On one hand I get it, with their trademark black helmets Daft Punk is the musical equivalent of Cobra Commander, so why not have an action figure? But Daft Punk’s funky club music makes me think of designer drugs and flashing lights…two things I don’t associate with toys.

These toys are out to get lucky.

5. Incubus longboard: Do people associate Incubus with skateboarding? I don’t. I associate it with crappy Junior High School dances and Smirnoff Ice. Anyway, if you want your…skateboard chums…to think you’re cool stay the hell away from this this board. I mean, check out the super-exaggerated poses of the members of the band. You got one guy about to take flight Superman-style. Another guy appears to be slipping on a banana peel. Then there’s the dred-head dude who’s hair appears to be attacking his bandmate. And don’t get me started on the frogman with his hands held over his head. What the fuck Incubus? This product is anything but “Stellar.”

6. Muse “booty” shorts: I look at Muse and wonder “who likes this band?” I’ve never met a Muse fan, let alone a Muse superfan that would want Muse-themed underwear. Seeing these underoos on a lady would be a total mood killer for me. At a certain point fandom stops being cute and becomes scary, I think band-themed underwear is that demarcation line.

Not sure if you want to associate your band with “ass.”

7. Green Day Coasters: First, let me make the obvious joke: who needs TRE drink coasters when you can just use the CD’s? Look, I’m going to be honest and admit I only listened to part of UNO, so maybe DOS and TRE aren’t that bad. Maybe Green Day really is still making good music. Maybe I’m actually getting more hair, rather than losing it. Maybe.

Now that I got that out of the way let’s explore punk and drink coasters. Is there anything more un-punk than worrying about those wet circles on your coffee table? Is there anything less punk than owning a fucking coffee table? At this point, music nerds will point out that Green Day stopped being punk back when Bill Clinton was president. Fair point, nerds. The notion that Green Day has entered the extreme merchandising phase of their career makes me feel old and sad.

Whatever happened to living without warning? Coasters are not risky.

8. Guns N’ Roses Poker Chips N’ Cards: This is perplexing. Elvis themed cards and poker chips would make sense, after all he has a really famous song about Las Vegas. GNR? Not so much. I only associate GNR with Vegas these days because that’s the only place in North America where Axl seems to want to play live. Why not a Guns ‘N Roses handgun? Surely such a thing exists. Just don’t give one to Axl.

9. Nickelback Shot Glass: Now this product actually makes a lot of sense! The only way I’m going to listen to Nickelback is in a state of extreme inebriation. Really the only thing wrong with this shot glass is that it’s too small.  I think that they should have made this a 2oz. glass rather than a traditional 1oz. glass. Not that 2oz. of booze is going to be enough to get me in the mood to hear Nickelback, mind you. The website where I found this product was also selling “Official 2012 Tour Booty Shorts.” What is it with shitty bands and booty shorts? I opted to not display these here because the notion of women debasing themselves with Nickelback underwear is too much, even for a joke-post like this one. Please do yourself and favor and never Google “Nickelback merchandise.”

If somebody wants to buy me this shot glass I’ll totally use it though.

So how about it? Which one of these things do YOU want Santa to bring you this year? Chime-in below in the comments section.