Sometimes there are questions too big for one man. Sometimes, in the search for ultimate truth, we must seek the guidance of others. And then there are times when one wants to increase traffic to one’s blog by actively seeking participation of one’s small readership by stoking the fires of eternal debate…

Yes friends, it’s time to review the lastest statistical disaster I like to call my HIGHLY-UNSCIENTIFIC ROCK POLL!  With the temperatures rising and the days lasting longer, I found myself in a summer mood.  I have a lot of fond memories of sitting by an inflatable kiddie pool listening to the radio.  I also spent an inordinate amount of time driving around the suburbs listening to an assortment of shitty pop stations.  Anyway, summer means many things to many people, which meant choosing an all-time best song of summer wasn’t going to be easy–luckily I had some help this week. 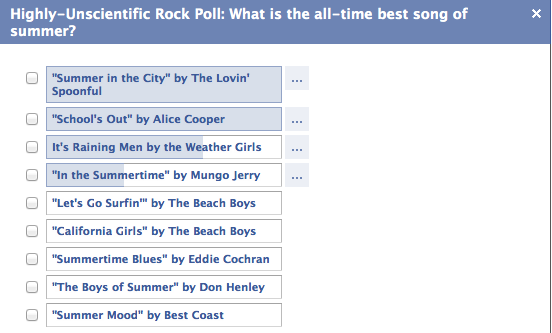 9, 8, 7 and 6 (no votes) “Let’s Go Surfin” and “California Girls”  by The Beach Boys, “Summertimes Blues” by Eddie Cochran, “The Boys of Summer” by Don Henley, and “Summer Mood” by Best Coast: So I guess I should start off by saying that this poll is full of meddling.  Even though about the same number of people participated in the poll as usual, meddling was up 300% from my last two rock polls.  Initially I only had one Beach Boys song on the list, but one of my relatives on Facebook (where these scientific polls are conducted) asked me to add “Let’s Go Surfin,” which is fine but after I added it–she didn’t vote.  So technically “Let’s Go Surfin” should have one vote, but I’m a stickler for the rules and just commenting on a poll does not equal an actual vote. I’m a Beach Boys fan, as cheesy as 99.999% of their songs are–you have to give them one thing: they own the summer.  They have so many songs about the beach, summer, waves, surfing, riding around in cars, etc. that to exclude them from your summer music mix would be a crime.  “Summer Mood” by Best Coast was my attempt to add something a bit newer (less classic rock-ish) to the poll, though I can see why they got no votes.  I absolutely love Don Henley’s “The Boys of Summer.”  That song really takes me back to high school and all the things I should have done, could have done…it’s a very bittersweet song and whenever I hear it I think about those high school summers. I’m a bit surprised it didn’t get a vote (I couldn’t vote for it because it makes me a bit sniffly).

“Summertime Blues” by Eddie Cochran, are you fucking kidding me? No votes? Clearly this poll is unscientific because we all know that song kicks-ass–there ain’t no cure for the summertime blues!!!!

3. “In the Summertime” by Mungo Jerry: Alright, more meddling, but this was meddling of the welcomed variety.  One of my poll-takers added Mungo Jerry’s laid-back classic to the list, how I forgot this tune I’ll never know.  I heard it again on the radio and it pretty much sums up the summer experience.  I don’t know a thing about Mungo Jerry, and I bet you don’t either, but we’ve all heard the song.  If I could have had two votes I definitely would have voted for this song.  I also love how creepy/fucked up it is towards women.  It’s such a happy-song and then bam! The singer give you advice about how to treat the daughter’s of rich and poor men (“if her daddies rich, take her out for a meal/if her daddies poor, then do what you feel”).  I always like a little creepy in my summer.

2. “It’s Raining Men” by The Weather Girls: Sigh, this was more meddling on the part of my poll-takers.  I guess this is what I get for allowing people to add their own options.  DEMOCRACY: IT JUST DOESN’T WORK.

1. TIE: “School’s Out” by Alice Cooper and “Summer in the City” by The Lovin’ Spoonful: I voted for “Summer in the City” because it’s catchy and a little scary sounding.  That keyboard riff is iconic, you hear it and you instantly know what song your hearing.  Mungo Jerry’s song perfectly captures the easy-going nature of the country in summer  and The Lovin’ Spoonful do the same thing for the city.  Except the city is not easy-going.  The song rhymes “city” with “pity” so  you know dark shit is going on.  Whenever I hear this song I think about that dirty mixture of smog and sweat.

Alice Cooper’s “School’s Out” is a fantastic choice for #1 as well.  We’ve all been there–counting down the days until school was out for the summer.  Remember cleaning out your locker? I used to gleefully throw everything away. School is out for the SUMMER!  It’s been a few years since I was “out for summer” so this song has lost a little of it’s appeal, which is kind of sad now that I think about it.  Like “Summer in the City,” “School’s Out” has a dark edge to it as well (what with all the talk about school being blown up and the chuggy-guitar riff). When I think of summer, I don’t think of “dark” or “gritty” so why did these songs end up getting the most votes? I suppose it’s the highly-unscientific nature of the poll, but I also think that as a species we’re attracted to the macabre…even in the middle of summer.