First off, this is all my fault. I should have known better than to go to Pitchfork to read about an album that I enjoy. I gave up on Pitchfork ages ago as it’s just a bunch of hipster douchebags ragging on everything that 99.999% of people find good. And yet, for whatever reason, I ventured onto Pitchfork and searched for Jason Falkner. I recently finished reading the excellent Jellyfish biography Brighter Day: A Jellyfish Story and have been re-listening to Falkner’s last two solo efforts, I’M OK…YOU’RE OK from 2007 and ALL QUIET ON THE NOISE FLOOR from 2009. I don’t remember either of these albums being terrible, but they didn’t make much of an impact on me. Revisiting them 10+ years later, I’m finding them to be top-notch efforts that I want to hear over and over again. Seriously, these are great albums, so great I will probably be writing about them soon.

Anyway, I went to Pitchfork to see if perhaps they had evaluated either of these records. Of course, they hadn’t. Pitchfork is too cool to review awesome indie records with little/no buzz. The only Falkner albums they have reviews on are a compilation of tracks called NECESSITY: THE FOUR TRACK YEARS and a “review” of Jason’s second album CAN YOU STILL FEEL? I put the word review in quotes because despite giving the album 5.8 out of 10, the article written on Pitchfork isn’t a review of the album. Instead, it’s a lame-ass bit of creative writing from some hipster jagoff named Shan Fowler. Rather than write a review that explains the 5.8 score (what’s good about the album, what’s bad about the album, what thoughts does Fowler have about CAN YOU STILL FEEL?) instead the reader is treated to an imaginary conversation wherein Jason Falkner goes to a front-man self-help/AA-style meeting and confesses that “the people aren’t coming.” The punchline of this “review” is that the “people” are never coming and that Falkner should just give up and move back home with his mother. Hilarious. So thought provoking. So insightful. Fowler is a fucking genius and should write for Saturday Night Live. Although, as funny as this review is, Fowler may very well write for the current season of SNL…it’s really that amusing.

This kind of shite is the reason I quit Pitchfork years ago. I’m okay that their gimmick is that they hate everything mainstream/you love and that they only champion obscure bands no one in their right mind actually enjoys. I think there’s a place for that sort of website/critical opinion. But this lame “creative” anti-review just pisses me off and makes real critics look bad. This is coming from a guy that wrote a positive and negative review of the same Lana Del Rey song. I was going to include a link to the review on Pitchfork, but frankly I do not want to give this “review” any extra clicks today. Here is a screen shot: 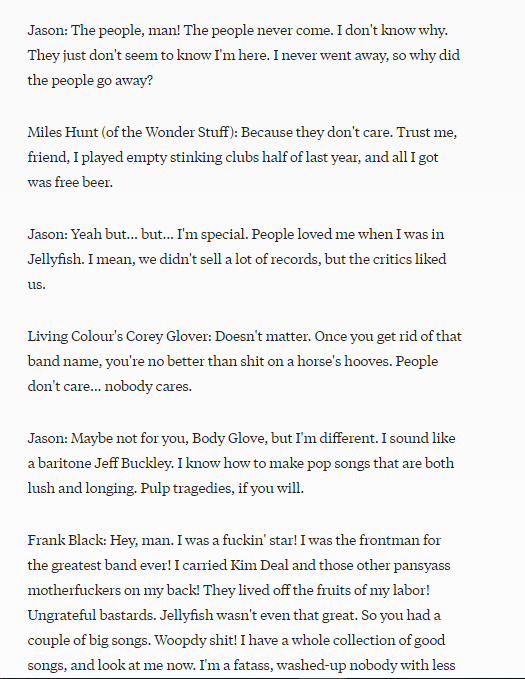 The second album review on Pitchfork begins with the sentence, “Jason Falkner is a wuss of considerable talent.” I literally stopped reading and hit the back-button on my browser. Shan Fowler, wherever you are, I challenge you to write an actual review of this album. One that actually, you know, talks about the content of the music. Email it to me at DefendingAxlRose@gmail.com and I’ll post it for you and everything.