As part of the Defending Axl Rose 2.0 initiative I’ve taken to social media to increase my site hits.   Facebook has successfully monetized itself in regards to brand promotion and no longer offers much in the way of free promotion for us little guys.  I decided to start using Twitter and Reddit to get the message out about my posts, and for the most part it’s been successful.  I find that Twitter is cool because you often have a chance to actually connect with bands/artists.  There’s a gent I’ve started following calling himself Review Rhino who tweet 140 character reviews of songs that bands send him.  Recently he managed to ruffle the feathers of a struggling band calling themselves Black Vendetta.  They’ve had a back-and-forth exchange that I got in the middle of quite by accident.

Now, that might seem like a harsh review, but there are a couple of factors one needs to take into account.  Firstly, Review Rhino has 140 characters by which to mention the track name, the band, a brief review, and then give a numerical score.  There’s no pussyfooting around because there’s no space for Review Rhino to gently say “I don’t like your song.”  The second thing that you must consider is that Review Rhino does not seek out songs to review, instead bands willingly send their songs in for review.  As you can imagine, Black Vendetta weren’t thrilled by the review, but the band really got upset when Review Rhino tweeted his “best” and “worst” tracks of the month: 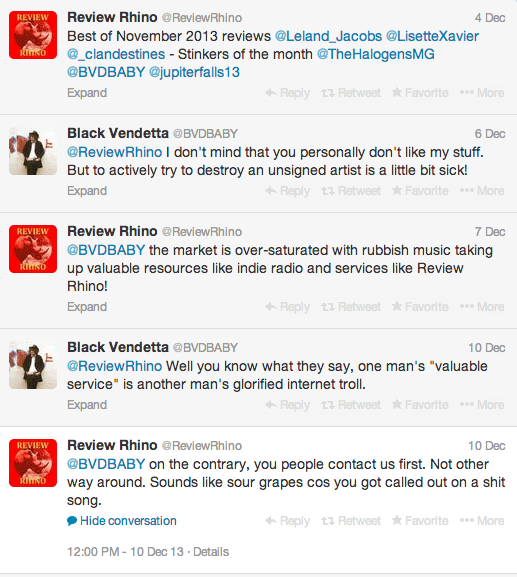 Now, even though I don’t want to side with someone complaining about a bad review, I can see Black Vendetta’s point.  I struggle to keep it positive here at Defending Axl Rose, and tend to shy away from things like “worst of” lists because it’s easier to just be positive.  That said, I can see Review Rhino’s point of view, too.  The market is saturated with a lot of mediocre, delusional people making a god-awful ruckus.  For the record this is how I got involved: 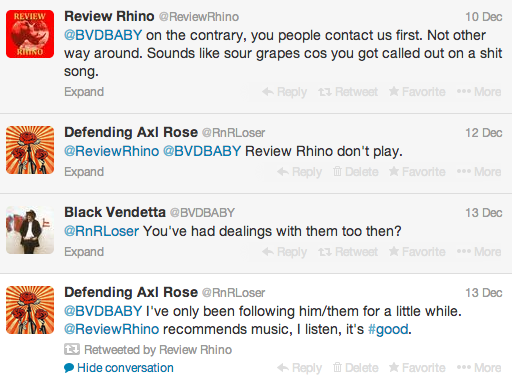 There’s a lot more after that, Black Vendetta goes on and on about how unfair it is to pick on unsigned bands.  He/she/they also take time to point out that they have a degree in journalism…it’s really very unfortunate.  This is the part of being a critic that’s a frankly a little scary to me.  I’ve been getting lots of requests to review things lately, and some of what people want me to review/write about isn’t very good.  Unlike Review Rhino, I don’t have the stones to play Simon Cowell and crush someone’s dreams.  Don’t get me wrong, I have no problem telling you that the latest Megadeath album is an utter piece of garbage.  Or that I have desperately tried and failed to listen to all of Black Sabbath’s latest album 13 more than thirteen times.  I’m just not sure I could tell that to an unsigned indie like Black Vendetta.

However, as the saying goes: there’s no such thing as bad publicity.  This Twitter thread got me interested in Black Vendetta’s song “Tennis Girl.”  So I fired up Spotify to see if the band was streamable, and sure enough they were! So I listened to “Tennis Girl,” and so can you! I’d like to give the band a chance and put it to a Highly-Unscientific Rock Poll: Does “Tennis Girl” by Black Vendetta suck or not?