Have you ever gotten something and wondered how you lived your life without it? I know I existed prior to getting an iPhone, but it’s changed how I live so fundamentally that I honestly can’t imagine going to back to a life without it. Well buckle-up kids, because you’re about to have a life-altering experience. Seriously, you’ll never be the same once you see and hear Mac Sabbath.

Well buckle-up kids, because you’re about to have a life-altering experience. Seriously, you’ll never be the same once you see and hear Mac Sabbath. What is Mac Sabbath? It’s a fast-food themed Black Sabbath tribute band. Well, I guess they’re kinda/sorta a tribute band. See, they don’t just dress up like McDonald’s characters and sing Black Sabbath songs, they change the lyrics in order to attack and expose the evils of the fast-food industry. The band is equal parts metal band, post-modern art, and political satire. Mac Sabbath is definitely one of those things that’s too good to be true. 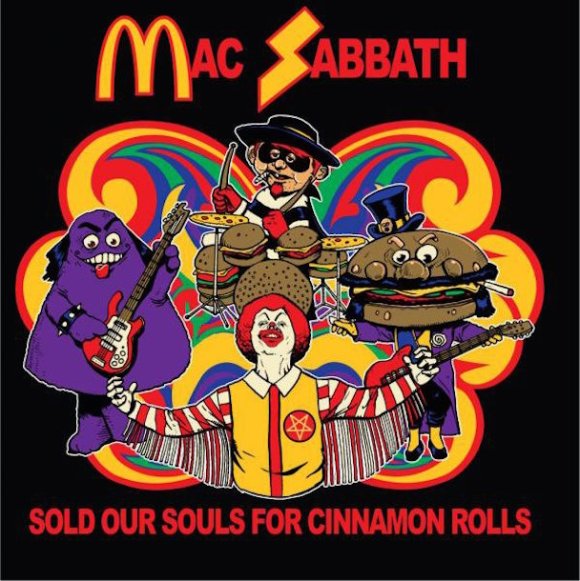 Take for example “Frying Pan” which is the band’s take on the classic Sabbath song “Iron Man.” Mac Sabbath turns the song into a (humorous) indictment of the fast-food industry from the perspective of the poor wage-slave making our pink slime-infused meals.

And of course they’re able to work in a gluten reference:

I can’t image writing lyrics to songs, let alone writing lyrics all around a single theme and making them fit into the framework of an established song. A lot of people try their hand at this, and while there are a few standouts who really do a good job, I feel like most comedic attempts at parody songs are just that: attempts. Mac Sabbath really hit it out of the park on their songs. I listened to six of their songs and all six were well-done (pun intended).

While the members of Mac Sabbath are talented satirists, it’s worth noting that they could also pass as a pretty decent Black Sabbath cover band. The music sounds remarkably good for something so batshit crazy. You can tell that besides really hating the fast-food industry, the members of Mac Sabbath really love Black Sabbath.  Sure, the drummer is dressed just like the Hamburgler, but he’s also a damn good drummer.

These guys are based in L.A. but apparently tour just like any other rock band. And just like Kiss or Ghost (B.C.) they stay in character most of the time and always appear on stage in full regalia. The band even has hilarious metal/McDonald’s mash-up stage names like Ronald Osbourne, Slayer McCheeze, Grimalice, and Catburgler.

Considering such how detrimental to our bodies and the environment fast-food is, making them the fodder of a metal band makes 100% perfect sense. McDonald’s is far more nefarious and scarier than say, popular metal villain, Satan. I would love to know what the good folks at McDonald’s think about this band (though I can guess) and I’d also like to know what Black Sabbath thinks about them as well. Considering that band plays with the intellectual property of two mega-corporations (McDonald’s being a tad bigger than Black Sabbath) I’m kinda shocked these guys are able to exist.

I’m probably late to the Mac Sabbath party, but I had to write about this band because it’s one of the more creative things I’ve seen this year. And, hilariously enough, they’re the most balls-out metal thing I’ve encountered in years (thanks to Cartoon Network canceling Metalacolypse).