A few weekends ago I saw Tony Scott’s TRUE ROMANCE for the first time (not sure why it took me so long to finally see it). Have you seen this movie? It’s pretty good, if you haven’t you need to check it out. Anyway, in a nutshell it’s about these two completely looney/borderline-psychotic people who fall in love…and into a whole world of trouble. It reminded me of Bethany Cosentino and Nathan Williams. These two kids just belong together, even though it would probably better for them both if they weren’t a couple… I can’t believe how invested I am in their romance. Anyway, Bethany is a band called Best Coast and Nathan fronts a punk-pop-noise band called Wavves. Both hail from California and are full of a kind of youthful vigor and passion that makes me both incredibly happy and sad at the same time. 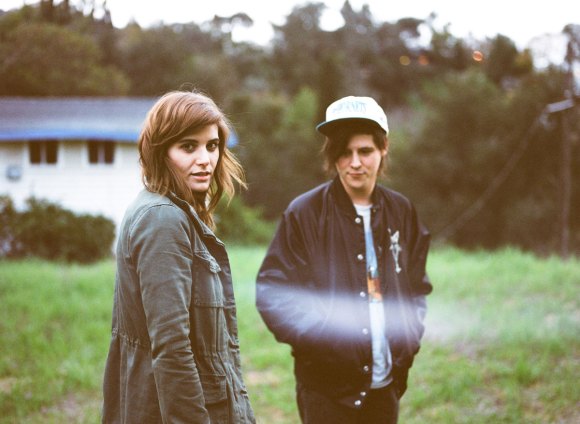 She and him together (with a photographer).

Let’s go back to 2010. I can’t remember where exactly I was when I first heard Wavves, but somehow I heard them and they blew me away. Wavves is everything I love about rock and punk all rolled up into with a generous sprinkling of killer stoner-riffs and shit-tons of attitude. And not to draw too many comparisons to another famous California band (i.e. The Beach Boys), the lead singer the leader of Wavves (Nathan Williams) wrote about the beach and the ocean–even though he doesn’t swim. I guess that appeals to me because I don’t know how to swim either. The mysticism/idea of the American beach-scene is so appealing to me, even though I’d never take my shirt off in public. Because it’s not about taking your shirt off or swimming. Hell, it’s not even about surfing. It’s about the freedom; the foot-loose-and-fancy-free attitude. It’s also about the notion that all of life can be distilled into a “way of life”, a way of life revolving around beach fires and surfing–that shit appeals to me.

It wasn’t soo after I started listening to Wavves excellent album KING OF THE BEACH that I found out the mysterious Nathan Williams was head-over-heels in love with a cool stoner chick named Bethany Cosentino–who it just so happened, fronted a band of her own called Best Coast. Best Coast and Wavves, could their names be a more perfect match? And their music compliments each other as well. Where he is sour, she is sweet. It’s a bittersweetness, but a sweetness nonetheless. I got her band’s album BEST COAST and found myself liking it just as much as KING OF THE BEACH (though in a different way) . Listening to both albums and knowing that the two are connected is like watching a film in 3-D, it’s not necessary to enjoy the proceedings but it does add an extra dimension to proceedings, and yes…it does make you feel like you are “there.”

Their unwieldy, moody young love is laid bare in both of their records, almost to an embarrassing extent. That these two people, a stoner-skater boi and a cool-ass artist chick, would need each other so much is as startling as it is pedestrian. In a way they’re like an indie version of Romeo and Juliet. Whereas his music is brash and defiant, her’s is wistful and seductive, but even on his KING OF THE BEACH record, there are moments of genuine affection I can’t help assume is directed at Bethany. By themselves Bethany and Nathan are good, but with the help of their love, what they create is amazing. His KING OF THE BEACH album and her BEST COAST album are perfect bookend/yin-and-yangs. They complement each other in ways that only a man and woman in love could. But they are young, famous, and artistic–and their love, while perfect in it’s imperfection, can only last so long. I hope I’m wrong. In fact, even though I’m not religious, I pray that I’m wrong. Having them break-up would be more devastating than if my own parents broke up.

The BEST COAST album is nothing but a giant love letter to Nathan: he doesn’t love her as much as she loves him, she needs him, but he just wants to be friends. He’s a typical young jerk, not willing to give himself completely to her. It’s just how he is. The Wavves album, KING OF THE BEACH is playful, and at times angry and defiant, he’s just having fun and getting stoned…on her weed we find out from listening to the Best Coast album(!). The Wavves album is balls-to-the-walls FUN, whereas the Best Coast album is tortured and a little sad (why won’t he just love her the way she loves him?). In a way, it’s a bit like inhabiting the bodies of two people witnessing the same car accident–both are seeing the same thing but a few key details seem to be fundamentally different based on their individual biases.

there are moments on the Wavves album where we see that Nathan can’t espace Bethany and his feelings for her (like on “Green Eyes”). Watching them fall in love–or rather listening to them–is magical and akin to seeing a younger brother or sister experience love for the first time. I don’t want either of them to get hurt because I like them both, but I know that’s not possible. And yet I wouldn’t have it any other way. Because that’s just what young people do–they fall in love and get hurt. It’ll make them better people in the end, and probably give us at least three or four awesome Wavves/Best Coast albums worth of material.

The third person of this love triangle–SNACKS the CAT!!!

Best Coast has a new album coming out on Tuesday, and I’m a little worried. The first Best Coast record, BEST COAST, is full of beautifully tortured unrequited love songs…all about Nathan. Now that the two rockers are living in rock-bliss, what kind of record will we get? I mean, I want these kids to be happy, but I also want their records to be badass…and happiness and badass rock are not always the best of friends. But I’m going to reserver judgement until I’ve heard the full record. Perhaps the bliss of young love will surprise me and provide fertile rock material (but I doubt it). It’s a bit of a double-edged sword: I want them to be happy but at the same time I want awesome records that only emotional discontent will provide.

Wavves put out an excellent EP last year (LIFE SUX) but a forthcoming album has me worried. What will Nathan do now that he’s happy? Why does an artist have to be unsatisfied to produce worthwhile art? I don’t make the rules kids, I just live by them. Either way, these two bands have done more than just mythologize the great state of California, they’ve provided me a window back into the tortured world of young love. If you have a heart and love rock and want to relive young (stupid, incredibly destructive) love, then I strongly urge you to check out the stoner-rock-punk shenanigans of Waaves and the echo-y, lovelorn sounds of Best Coast.