Tag Archives: TOGETHER THROUGH LIFE

A wise-man once said: Why review some albums, when you could review them all? Indeed.  Here is the third in my New Album Round-Up series:

TEMPEST by Bob Dylan:  I didn’t really like or get Dylan until it was way late. Like MODERN TIMES (2006) late.  Sure, he sounds like a Muppet and his songs are more mysterious than they probably need to be…but the man’s a genius when it comes to writing songs that work just as well as poems.  Think about your all-time favorite song–would it make a very good poem?  Chances are no, it would not.

Dylan’s always like long, rambly story-songs but his latest album TEMPEST takes things to a whole new level.  The album is nothing but long story-songs.  His voice even more craggy and ragged than usual.  The last two albums, the before-mentioned MODERN TIMES and TOGETHER THROUGH LIFE, have had a 1930’s/1940’s vibe to them.  TEMPEST seems more traditional folk/blues, with none of the period flourishes from before. I’ve read that TEMPEST is going to be the “last Dylan record” which is a shame because this doesn’t really feel like THE END. Of course, I would have no way of knowing what the end of Bob Dylan would sound/feel like. 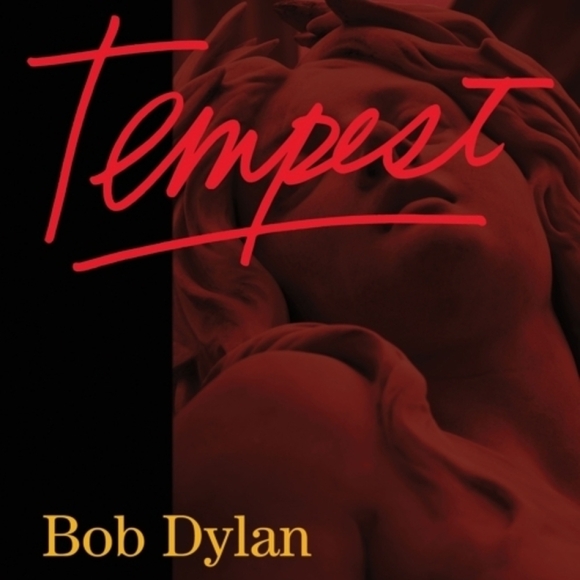 The title references Shakespeare’s final play. Man, I really hope this isn’t the last Dylan album. Surely he has one more Christmas album in him…

Regardless, I’m not going to lie: this is pretty much for hard-core Dylan-ites.  Sure, there are a few tracks that might please a general audience, like the bluesy “Narrow Way.”  The song has my favorite line of the record: “If I can’t work up to you/you’ll surely have to work down to me someday.”  That’s both really funny and really poignant if you think about it.  This song seems to be written for any man who’s ever loved a woman way, way, way out of his league.  As awesome as this song is,  “Narrow Way” clocks in at over 7 minutes, which may test the patients of all but the super-devoted.

I guess you could say that about pretty much all of TEMPEST, which is a shame because there is a lot of really good lyrics peppered throughout the album.  Part of me wishes that someone had edited some of this material down–but to be honest, Dylan has earned a little indulgence. Both “Pay In Blood” and “Long Wasted Years” are fabulous anthems for the tired and crotchety that, quite frankly, would be less effective had they been shortened/watered down.  So pull up a chair and listen to grandpa Dylan sing you story.  Sure, he might prattle on a little too long, but when he’s good….he’s good.

Much has been made of “Roll On John,” the album’s last track.  Dylan’s song about John Lennon is actually pretty damn good.  He references several Lennon songs, including “A Day In The Life” in a way that would probably seem a bit cheesy, were it not THE Bob Dylan making the reference.  It’s an appropriately sad song, about a friend Dylan lost too soon.  Especially heart breaking:

I pray the lord my soul to keep

In the forest of the night

Cover him over and let him sleep”

As “Roll On John” ended I felt as though I’d lost two music hero’s: Lennon and Dylan.  If this really is the final Bob Dylan album, then it’s also the end of a major-era.  Not only in music/art but in pop culture.  There has never been a time in my life where there wasn’t Bob Dylan.   Remember this day, folks.