I first discovered Canadian Indie-rockers Boxer The Horse last year while browsing eMusic.   I really dug their awesome first album WOULD YOU PLEASE, especially the song “Bad Apples” which was one of the best songs I heard last year.  I played it countless times (so many times I literally lost count).   So as you can imagine I was pretty stoked when I found out that the band released a new album this week.  Boxer The Horse is a bit like the films of Wes Anderson–you’ll either dig their somewhat twee-sensibilities or you’ll loath it.  Their songs are carefully constructed, literate, and despite having a shiny-pop veneer are often pretty dark.

FRENCH RESIDENCY finds the band improving and growing in just about every sense–the songs are better, the hooks are hookier,  and the songs are longer/more fleshed out.  One of the things I really like about Boxer The Horse is how diverse their albums sound.  They do spooky-indie pop (“Me & Steve McQueen”), straight out rockers (“Rattle Your Cage”), a kind of neo-folk (“Tough Luck”), and punk (“Bridge To The USA”).  I think it’s cool that the band does what they want genre/conventions be damned.  That said, I  can see how this might come across as a bit schizophrenic to some, and might even be considered a weakness for those who need everything carefully slotted into neat categories.  Regardless,  I find it refreshing and I’m sure this diversity makes them one helluva live act.

The best song on FRENCH RESIDENCY is “Rattle Your Cage.”   It’s that awesome brand of hard-charing pop song  the radio used to adore when we were kids, it’s shocking how good it is.  It reminds me of ROOM ON FIRE-era Strokes (that’s a good thing).  I love the hook, the guitars, and the awesome way the song collapses at the end.   “Rattle Your Cage” is the sort of song that demands to be played in an arena.  On the other end of the spectrum is “Me & Steve McQueen” which is quiet and intimate, almost anti-arena rock song.  It’s a murky, mysterious ballad that materializes and then quickly vaporizes like a ghost.  It’s less than 2 minutes of bliss.

I love that the laid-back “Tough Luck”  leads into the aggressive “Bridge To The USA.”  It’s a thoughtful bit of album construction that you don’t see much of these days.  The song “T. Rex” won me over as I was typing this review with the hilariously spot-on lyric: “don’t look so depressed on a Sunday morning /well don’t act like such a slut on Saturday night.”  That’s a Fagen & Becker-ish bit of cattiness I can’t help but love. The album is filled with little nuggets and flourishes that really impress and reward repeat listens.  I’m also intrigued by the fact that there’s a darkness lurking just under the surface throughout FRENCH RESIDENCY.  It reminds me of the way a lot of John Lennon’s solo albums felt. 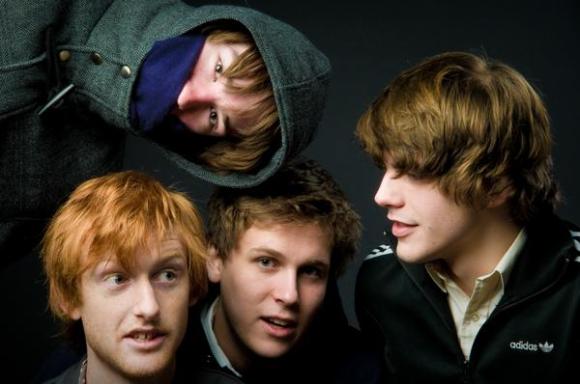 That’s not to say that everything is perfect on FRENCH RESIDENCY, it’s not.  There are a few tracks that only-half work for me, the biggest offender being the Vampire Weekend-like “Party Saturday.”  It’s a bit too cute, even for me (though it does have a nice guitar solo).  “Karen Silkwood” is the other song on the record I just can’t get behind.  It’s so damn bizarre, lyrically, that I think I’m going to have to listen to it a few more times before I can figure out what it’s trying to say (if it’s trying to say anything).  A quick Google search reveals that Karen Silkwood was an Oklahoma labor activist who died under mysterious circumstances in 1974.  With that in mind, the song “Karen Silkwood” opens thusly: “I’m in the car when Karen Silkwood was killed / Texas Ranger won’t you marry me still?”  I’m all for complex lyrics and interesting narratives, but that’s just strange to be strange, right?  Speaking of odd things, I noticed after a few listens that there are multiple references to blood and bleeding scattered throughout the album.  I can’t say for certain, but I think this might be a subconscious-tic on the part of the band.  I know that as a writer there are some words and phrases I will use repeatedly if I’m not careful.  I wouldn’t be surprised if no one in the band was aware of this.

Historically, the second album is the one that separates the men from the boys.   FRENCH RESIDENCY is not a just an excellent sophomore album, it’s an excellent album in general.  It proves that WOULD YOU PLEASE wasn’t a fluke, but rather the beginning of an exciting career.