Tag Archives: “You Are Number Six”

I always say this but: it’s been too damn long since I’ve done a METAL MONDAY post. Today I want to share with you a little bit of insanity from Brooklyn, New York: Behold The Arctopus.  The band was formerly “Behold…The Arctopus” but are now operating with a different line-up, and have thus decided to drop the “…” in their name. 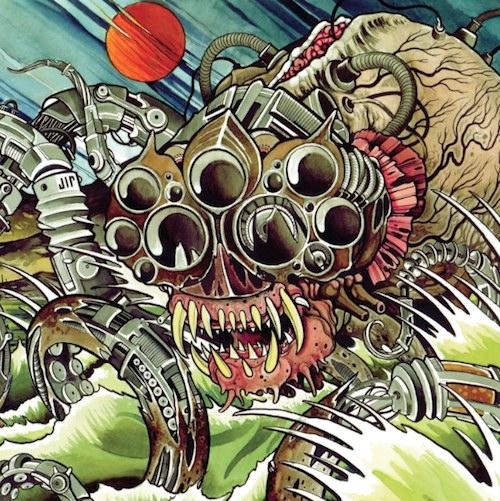 Regardless of what you call them, their bat-dung crazy sound has been described as “schizophrenic” and “radical.”  According to the band, they’re influenced by metal and…classical music?  Upon reading this I was intrigued, so I checked out their latest song “Disintegore” which is off their to-be-released album HORRORSCENSION, which come out at the end of next month (just in time for Halloween).

The band’s sound is experimental and prog-influenced.  The first few seconds of “Disintegore” reminded me a bit of Rush’s “YYZ,” for instance.  I‘m always keen to hear new and interesting sounds, and Behold The Arctopus seem to do nothing but generate those.  I dug a little bit into their back catalogue after stumbling upon them, and think their track “You Are Number Six” off their 2007 album SKULLGRID is the bees knees!

Even though I could see how many reading this might think all of this is a lot of bullshit noise, there has been a lot of work and thought put into these tunes.  Seriously, I know a lot of you don’t like/aren’t into metal, but give this band a listen: these guys are serious guitar heroes.  My finger tips ache just hearing some of the stuff they do.  And I’m not talking about guitar antics like that Steve Vai wank-off does either, this stuff has a real heart to it. Take a listen to “Exospacial Psionic Aura” if you don’t believe me:

Now, I’m sure a lot of metalheads are gonna tell me this isn’t “metal” because some Junior College-reject* isn’t screaming or Cookie-Monster growling over the music.  To those people I say: grow-up.  Sometimes I just wanna stroke my beard and listen to some awesome (and challenging) music without any of the childish metal-tropes/antics**.

Definitely check this band out if you’re into freak-outs, sonic assaults, proggy riffage, and intellectual vandalism.

Don’t be a snob, these guys are legit.

**Although those can be fun.