When it comes to finding new, awesome music, I try to be as proactive as possible.  I’ve checked out bands/albums because of reviews I’ve read in magazines (both positive and negative), TV appearances, ads online, and even patches on jackets I see at concerts.  One thing that I am notoriously bad about, however, is taking personal recommendations.

I’m a notorious reader and my office is filled with books that people have given me that I simply “must read.”  I try to get around to them eventually, but I’m fickle when it comes to doing things I “have” or “must” do.  It goes the same way with music.  Since starting DAR, I’ve had more than a few people I both know and don’t know try to give me music I “must” hear.  There’s only a handful of people who can tell me to listen to something that’ll actually convince me drop what I’m doing and put headphones on: one is an Uncle in Tennessee.

Anyway, I was on Facebook and a friend of a friend that I’m somehow friends with (ah, the digital age) posted a link to a Kickstarter fundraiser for his brother’s band. They wanted to go on tour and were trying to raise funds.  I like the idea of Kickstarter, even though I’ve only contributed to one (now two) so I checked out the link.  And thus, I was indoctrinated into the world of New Fad Zoo. 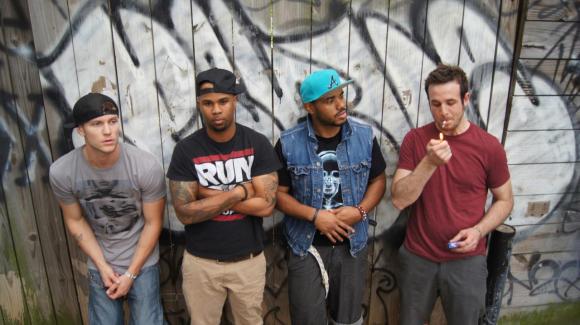 “I’m what happens when shooting stars and Mars meet, with the Big-Bang theory heartbeat, in High School I hung out with bullies and smart geeks, stoners and jocks, slut goths and car freaks, I ain’t fitting in I’m an artist.”

People are always surprised when they find out I listen to rap (or country for that matter) but the truth is there isn’t a genre of music I don’t like or listen to.  I will say that I’m not as much an authority on rap as I am on rock, pop, and blues.  But I do like rap, in fact, many current readers might be surprised to know that the very first album review posted on this blog was a review of The Beastie Boys HOT SAUCE COMMITTEE PART TWO.

But I digress.  New Fad Zoo are a quartet of dudes living in Atlanta whose first album, FERAL is the real deal.   What sets New Fad Zoo apart from the mob of pretenders is a knack for strong hooks and a razor sharp wit.  I was  blown away by how musically diverse/textured FERAL is.   Now, I realize that today’s generation of rappers are just as likely to know music and/or play an instrument, but I still feel like many (especially in the underground) still don’t place enough emphasis on music.  A beat is important, but if you can create a musical hook equal or greater to a lyrical hook—then you have a million dollar song.

New Fad Zoo doesn’t just have a few million dollar songs—they have a couple of billion dollar ones, too.  The heart-felt “Smile 4 Me,” the club-thumping “Ima Needa,” and “Love is Wild.”  I would like to go on record and say that “Love is Wild” is a number 1 record.   Period.  The record industry is all screwed up today, so it might not happen, but some savvy film producer or commercial director place that song in their film/ad it would sell 5 million units on iTunes.  “No Such Utopia” and “Me Against The World” take a break from the fun and are poignant, painfully honest songs about grief, fear, and anger.  In the context of the album, these harder-edged, serious songs provide much needed balance that many artists fail to achieve.

This balance only further underscores the fact that New Fad Zoo are a serious music force.  One that not only gets your head bobbing, but is able to get their songs implanted deep into your brain.

One thought on “FERAL by New Fad Zoo”