When I was an awkward teenager, staring the oblivion of adulthood in the face, I made a list of dream jobs I wanted to have.  Not serious careers I could have: these were the fun jobs I’d hold before I graduated from college.  I came up with three:

I’ve always loved books and music, so bookstore and record store were pretty obvious choices for me.  The security guard thing was a mixture of curiosity and the fact that my granddad had worked as a guard for a Pinkerton.  Shortly after graduating from High School I started living all my wildest dreams when I got a job at a small bookstore.  It was fantastic, I was quickly promoted to assistant manager AND I got to take books home and read them.  Not that it mattered I got to read books for free, I still spent 2/3 of my meager wage on books.  But like all good things, my time at the bookstore didn’t last very long, five months into my tenure there Barnes & Noble decided to close our store a few weeks after Christmas.  The dream was over. 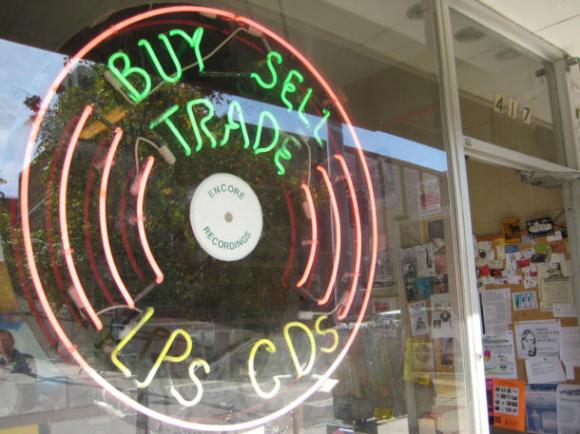 I was unemployed for a while, but then got hired on as a security guard—at the same company as my granddad.  I worked overnights and actually did MORE reading as a guard than I did while working at the bookstore. I found out that being a guard was thankless, terrible, boring work…so of course I did it for 5 years while I was getting my Bachelor’s in Rock-blogging (and thank God I did, because without a mountain of student loan-debt I wouldn’t be able to write about Lana Del Rey’s Pepsi-flavored snatch).

Sadly, I never got a chance to work in a record shop.  The closest I came was when Barnes & Noble closed my small bookstore and offered me a job at one of their mega-chainstores (where they sell music in addition to everything else).  I didn’t take the job because as they offered it to me they told me I’d probably hate it, having worked in a small, customer-centric store.  The idea of working in a “section” of a store as opposed to the whole thing wasn’t very appealing.  Working in small shop is great because it forces you to learn about stuff you’d otherwise never encounter.  I’m an expert of children’s literature and Christian Romance novels for this very reason.

Who’d have thought working in a record store would be just as unrealistic of a goal as being a novelist or astronaut?  I guess I even suck at picking small, attainable goals, too.  Working in a small record store never happened for me mostly because, even back in 2004 when I lost my bookstore job, there weren’t very many record stores left.  I think right now there are only three or four in St. Louis where I live now, which is crazy considering how many people live here.  Sometimes when I’m at work, sitting at my desk, I fantasize about working at a record shop.   The stocking of shelves; the rambling discussions with co-workers and customers about obscure British b-sides.  Maybe we’d have a company blog where I could offer recommendations  or a podcast where I could breath heavily into the microphone whilst reading off my Top 10 albums of the year.

A few years ago I saw a really great documentary called I NEED THAT RECORD! which was all about the struggles of independent record shops.  The entire time I watched I could think of nothing but getting a second mortgage on my house (alá GHOSTBUSTERS) and buying a shitty little hole-in-the-wall in some stripmall where I could sell water-damaged vinyl to bearded dudes in Sonic Youth t-shirts.  What does it say about me that I’d willingly enter into crippling debt to sit around all day peddling dusty albums?

The really sad part is, at this stage in my life I’d probably be willing to pay them for the privilege of working in a record store.  Like one of those balding, middle-aged men who pay Pete Townshend and that guy from Boston to teach them basic guitar at one of those Rock ‘N Roll Fantasy camps.  Maybe in a few years TLC or A&E will do a reality show where overweight music bloggers get to live out their fantasy of working in a record shop: Gene Simmons Presents…So You Wanna Work in Rock Retail?

Until then, I guy can dream.