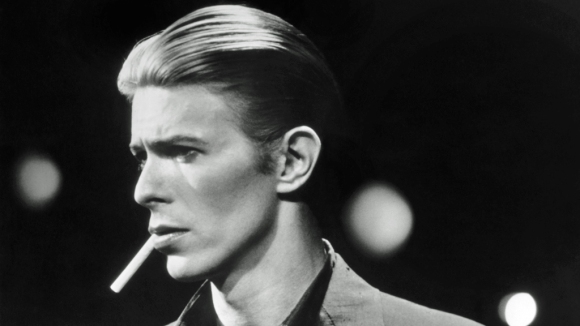 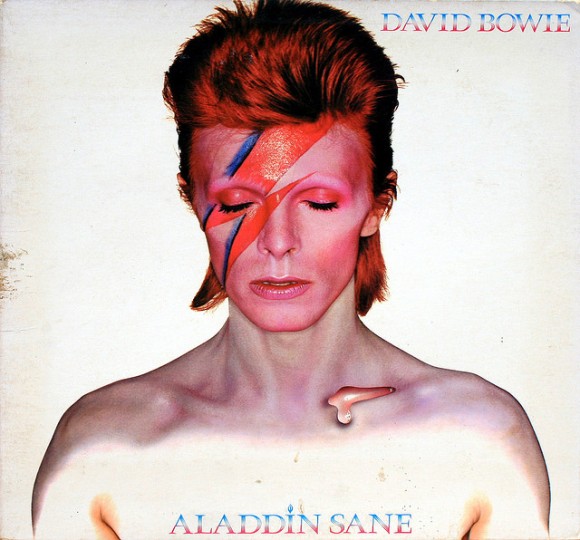 Maybe he's born with it, Maybe it's Maybelline.

In 1972, David Bowie toured the United States as Ziggy Stardust (his alien alter-ego). Both America and Bowie were never the same again. Bowie’s previous record THE RISE AND FALL OF ZIGGY STARDUST AND THE SPIDERS FROM MARS proved to be a smash hit–but the weirdness was only beginning.

God only knows what Bowie thought of mid-seventies America…his sixth album ALADDIN SANE (which is a play on “A Lad Insane”) is supposed to be/rumored to be Bowie’s take on the US…but Bowie is an enigma wrapped in a mystery–so to be quite honest, I don’t “get” it. I’ve never been real big on concept albums or story albums…or whatever. Some songs go together, they make an album–great.

But don’t try to tell some over-reaching narrative. It just doesn’ t work.

And neither should ALADDIN SANE. This thing is very much a “kitchen-sink” recording, meaning they threw in everything BUT the kitchen sink when they were recording it. So say that there is excess on this record would be the understatement of the decade…but hey, this is glam rock at it’s finest (meaning it’s supposed to be vampy and over-the-top). ALADDIN SANE has a surprisingly harder edge than I remembered. But I’ll get to that part in a minute.

More than about America, ALADDIN SANE seems to be about The Rolling Stones. Mick and the boys loom large over Bowie’s sixth record, no more so than on the record’s opening track “Watch That Man.” This song sounds EXACTLY like a Rolling Stones song. In fact, prior to researching the album for this blog post, I thought this was a cover. It’s not. The Chuck Berry-eque guitar licks, the frantic/half-muttered lyrics, the horns, the female backing-vocals…it’s all very Stones-ish. Apparently audiophiles (people waaay to into recorded sound) are split very heavily when it comes to this songs final mix. When you listen to “Watch That Man” on the radio you don’t notice it as much, but the instruments are pushed “up front” with Bowie’s vocals (rather than being on a separate channel, “pushed back” like in a lot of pop recordings). This means that for large portions of the song, Bowie cannot be heard as clearly as if he’d been bummed up a little “higher” than the music.

Bowie defended this (to his record label that wanted him to change it) by saying some crap about his voice being just “another instrument” (or some such nonsense). I think he really just liked it because it made the recording sound rougher, more crappy–like a Stones song.

Anyway, the Stones pop-up again a few more times on the record–once in “Drive-In Saturday” when he mentions Jagger by name, and again towards the end of the record when Bowie legitimately covers the Stones on “Let’s Spend the Night Together.” It was the latter that first attracted me to this album. There’s something about a good cover, I just can’t resist it. Most times covers blow–but there’s something special about Bowie’s unique take on “Let’s Spend the Night Together.” Bowie’s version is spacier, but it’s more than just a few electronic whizzing sounds…Bowie’s attitude is softer, sexier than Jagger’s. Then there’s the little verse that he adds toward the end:

Followed by an awesome guitar outro, this little bit of himself carries an otherwise awesome cover into legendary status and–in my book, is better than the original. A feat that almost never happens.

ALADDIN SANE is packed with interesting songs, with vastly divergent influences. There’s the blues-R&B stomper “The Jean Genie” that sounds like a Cream or Yardbirds songs. Bowie dabbles in doo-woop on “Drive-In Saturday,” which is about as far from the Yardbirds as humanly possible. This song, about a post-apocalyptic future-world where people watch porn at the drive-in to re-learn sex, gets the “Craziest song on this album” award. Because it’s really, really freaky man. Also freaky (but not nearly as freaky) is the cabaret/vaudevillian “Time.” Whenever I hear “Time” I think of Queen, the song’s sheer pomposity makes me think of Freddy Mercury. It’s that kind of song. It’s very long and strange, words really don’t do this song justice. I love it, and yet if I met it in a dark alley I’d probably run the other way.

“We should be home by now” indeed.

But the jewels in ALADDIN SANE’s crown are “Cracked Actor” and “Lady Grinning Soul.” Written in Los Angeles, “Cracked Actor” is a ballsy rocker–the hardest song on the album. It’s about an aging Hollywood actor getting serviced by a prostitute. With some drugs thrown in there. The song has fucking amazing guitar work and Bowie playing harmonica (of all things, I can’t imagine Bowie doing THAT). The lyrics are full of all sorts of loaded phrases and double entendres.

“Lady Grinning Soul” has been described as Bowie’s best attempt at a Bond Theme song. As in “Bond, James Bond.” It certainly is very cinematic and strange. This song is all about the lush piano and acoustic guitar. It’s very surreal but at the same time romantic–just like David Bowie. “Lady Grinning Soul” also has features the awesome “she will be your living end”-lyric. It’s about as far from traditional rock ‘n roll as music can get, and yet it’s on the same record as “Cracked Actor” and “Watch That Man.” It takes a big set of balls to pull something like ALADDIN SANE off.

I bet there are a lot of people that haven’t heard this record, if you fall into this sad category I urge to you go out and track down a copy of ALADDIN SANE. It’s a fantastic record that belongs in your collection.