“Dear God, why?” That’s what I thought when I logged into Spotify last week and spotted Train’s new album DOES LED ZEPPELIN II. I’m still not 100% sure why the album appeared in my feed. I know it’s not because I’m a huge Train fan…maybe it’s because I love Zeppelin? Just so we’re all clear, the Train in question (who just released a top-to-bottom cover of the second Led Zeppelin album) is the San Francisco alt-rockers best known for their 2001 album DROPS OF JUPITER.

I can’t believe that I’m writing a post about this band. Train is one of those incredibly forgettable bands that came and went without anyone really noticing because of how bland they are.  “Drops of Jupiter” is one of those obnoxious ear-worms that infect you and cause you to embarrass yourself in the grocery check-out line when you start quietly singing it under your breath. The only thing more vanilla-boring than Train are The Fray (don’t get me started). The more I think about it, the more I realize how the late 1990’s/early 2000’s were a truly dismal time for Top 40 pop-rock. 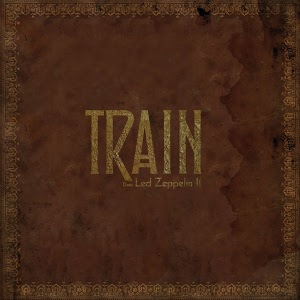 The album artwork is just as inspired as the music.

Anyway, this complete cover album is totally baffling to me on two levels. The first is: why does this exist? I don’t think I’m being (too) cheeky when I pose this question. What does it serve to make an album that covers a legendary album like LED ZEPPELIN II? This ties into my second “why?” in regards to this album: why would you release an album of covers that sounds exactly like the original? If I want to hear the second Zeppelin album, I can go and listen to it anytime I want. It still stands up today as one of the finest blues-inspired hard rock albums. If I want to hear another artist cover songs that love, I usually want said artist to bring something to the table. DOES LED ZEPPELIN II is so ridiculously slavish to the original (fantastic) recording, that it literally does not need to exist. There is no point. Sure, the production is a little cleaner, the guitar playing not quiet as tight, and the vocals a pale imitation of Robert Plants legendary performance…but the whole package sounds so much like Zeppelin that most casual listeners might actually mistake it for the original album.

I think that most of us would agree that an ideal cover presents a familiar (or unfamiliar) song in a new light. The best covers are more interpretive than mimicry. That’s why something like Gary Jules’ cover of the Tears For Fears song “Mad World” is so outstanding. Rather than reproduce the song verbatim, Jules took a great track and slowed it down turning a sad song into a wonderfully somber dirge. The same goes for Johnny Cash’s cover of the Nine Inch Nails song “Hurt.” When I think of both of those songs I almost never think about the original versions–that’s how good those two covers are.

Train had to have known that the kind of Gus Van Sant-devotion they were exhibiting on the Zeppelin project could only be viewed as an exercise in complete wankery. Surely the point of such a stunt is to show off that it could be done. I guess it is impressive that such a lame, mediocre band could record such an album…but the fact that they chose to record DOES LED ZEPPELIN II just goes to underscore why I find them so hilariously irrelevant. Hey Train, want to show smarmy bloggers like me that you’re not lame? Take the skill you used to create DOES LED ZEPPELIN II and make your own epic record.

2 thoughts on “Train Hilariously Cover All of LED ZEPPELIN II”